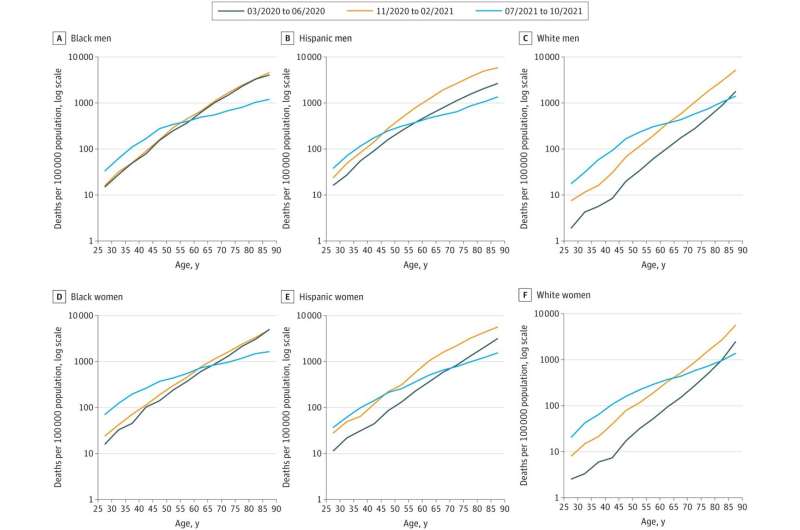 Early in the pandemic, older populations in the United States suffered the greatest death toll from COVID-19. But Penn demographers Irma Elo and Samuel Preston, with Boston University’s Andrew Stokes and others, wanted to understand whether this mortality pattern changed as the pandemic continued.

In a paper published in JAMA Network Open, the researchers reveal the results of their latest study. Between March 2020 and October 2021, the age pattern of COVID mortality changed in a striking fashion, tazorac before and after wrinkles with rates significantly dropping for those 80 and older and profoundly increasing for those 25 to 54. The findings held across racial and ethnic groups.

“The main message of the paper is that the age pattern of mortality has shifted over the course of the pandemic,” says Elo, lead author and sociology professor in the School of Arts & Sciences.

“This could reflect several factors,” she says. “For one, vaccine coverage is much higher among the elderly.” In addition, many younger people went back to working in person and to doing other activities that increased their COVID exposure risk, says Preston, also a professor in Penn’s Department of Sociology and senior paper author.

To conduct the work, the researchers pulled all death certificates with COVID-19 listed as the underlying or contributing cause of death for three periods of time: an early surge from March to June 2020, a midwinter surge from November 2020 to February 2021, and the delta variant surge from July to October 2021. To account for racial disparities in age-specific COVID-19 mortality rates, the researchers also stratified their analyses by race and ethnicity.

“Even as older-age mortality declined, life expectancy continued to drop in 2021 due to the significant years of life lost,” says Stokes, an assistant professor in the Department of Global Health at BU’s School of Public Health.

None of the findings, however, pointed to a decrease in how COVID-19 disproportionately affected different populations, Elo says. “The age pattern changed in the same way for all groups, but the COVID rates were higher in working ages for Black and Hispanic people than for white people throughout the pandemic.”

This study is part of a larger ongoing research agenda for the team. Future work will look at, for instance, why midlife COVID mortality went up so much in 2021, Stokes says. “While differences in vaccination rates were likely an important factor, state policies, occupational risks, and a lack of access to health care may have also contributed.”

Beyond that, the team continues to study mortality rates from the virus at the county and state levels, while delving deeper into implications by race and ethnicity. “We also want to study the relationship between COVID mortality and mortality from other causes of death at the state level,” Preston says, “to investigate whether places with high COVID death rates also had high rates of death from diabetes, cardiovascular disease, and other similar ailments.”