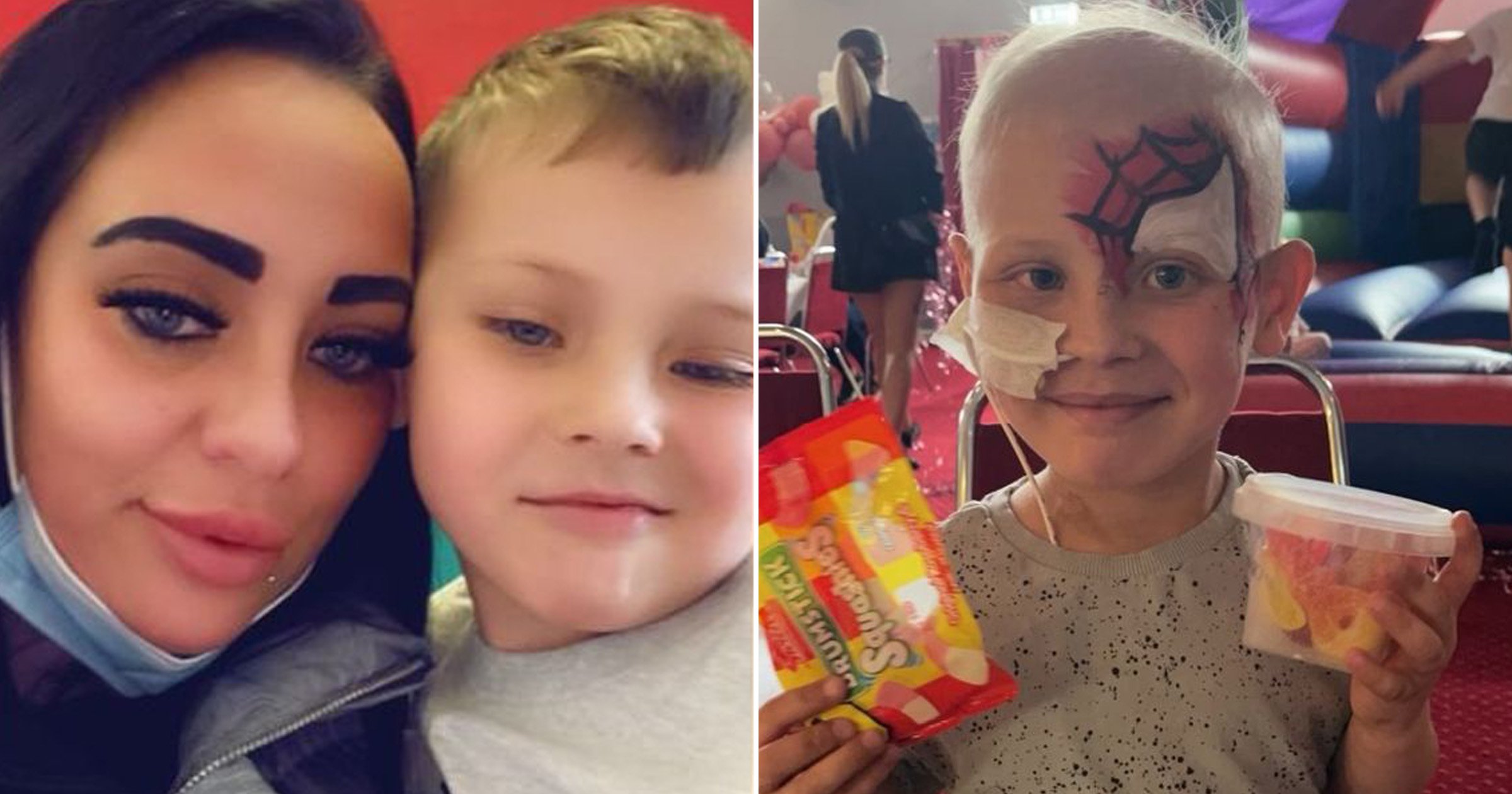 The 29-year-old took five-year-old Leighton to a walk-in treatment centre – but both times she went, she claims she was told there was nothing to worry about.

However, when a ‘tear’ opened up on little Leighton’s eye, he was referred Wigan Eye Hospital.

Mum-of-four Alexandra was told by doctors that Leighton needed an MRI scan ‘urgently,’ and it was then discovered that he had cancer – specifically rhabdomyosarcoma, a soft tissue sarcoma.

And Leighton received this devastating diagnosis on his sixth birthday.

Alexandra, from Huyton, soma rochester mn Merseyside, said: ‘After the scan, the doctor came out and told us it was a tumour.

‘He had to have all these different scans because they didn’t know what cancer it was at first. It all happened quite fast.

‘I just kept thinking why my little boy, he’s always been happy and healthy since he was a baby. He was the only one of my children who never really got sick before.

‘He had the first biopsy done and that’s when I found out the news that they’d found something and that it was definitely cancerous, but they didn’t know what it was.

‘That was on his sixth birthday, it wasn’t the nicest of news to hear on his birthday.

‘Then he had another biopsy, I think it was the next week, and we found out pretty soon afterwards what it was.

‘I explained it to my two older girls who are about only 10 and nine because I thought they could help me explain it to him. I had to tell Leighton exactly what it was.’

The cancer Leighton has is diagnosed in less than 60 children every year – with most cases happening in children below the age of 10.

Each prognosis will depend on a variety of things, although recent developments in the treatment of the cancer have significantly improved outcomes for patients.

However, even if a round of treatment is successful, there’s still a greater risk of the patient being diagnosed with a secondary cancer later in life.

Alexandra said: ‘He’s had nine cycles of chemotherapy, with the last one being this weekend, which is amazing.

‘He’s then got to go through another eight weeks of radiotherapy – six weeks on his head and two weeks on his lungs. That comes with another added risk because it can also cause a secondary cancer.

‘Don’t get me wrong, the outcome at the moment is looking positive. But there is that worry, what if?

‘Because we’re nearing the end of the treatment it’s starting to become a nightmare I have quite regularly of thinking what if it does come back.

‘He actually asked me the other day, he came up to me and said: ‘Mummy what if I get it again?’ and I didn’t know what to say to him.’

More about Leighton’s condition and other sarcomas can be found at sarcoma.org.uk.