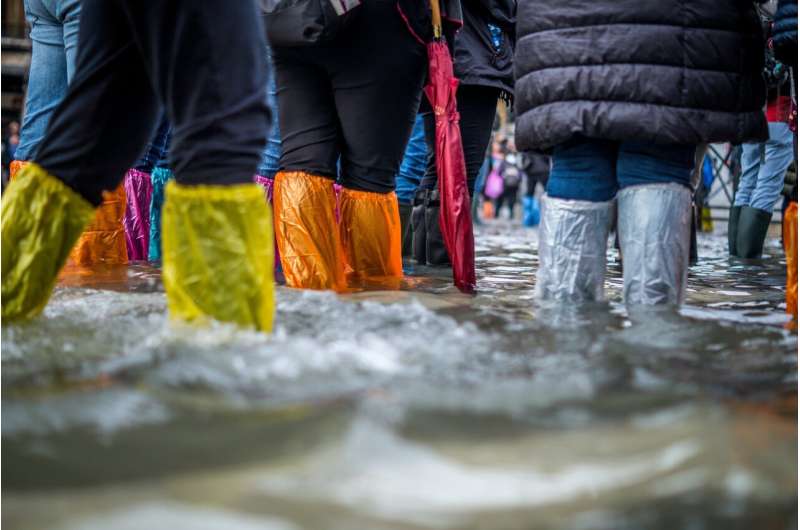 New South Wales is currently in the grip of one of largest flood events in decades. The NSW SES is helping thousands of people evacuate and has received more than 2,000 calls for help in the last 24 hours.

Western Sydney is one of the areas hardest hit, with the Nepean River rising to levels higher than that of the great flood of 1961.

Evacuation orders are in place for western Penrith, Jamieson Town and Mulgoa, in what NSW Premier Gladys Berejiklian has described as a one-in-100-year event.

Despite the SES warning of dangerous road conditions, some people have driven their cars through floodwaters. Others have defied the extreme weather and used kayaks to move across flood zones.

NSW police and emergency services minister, David Elliott, has urged people to heed SES warnings and never drive, walk, bupropion sr 150 mg tablet or ride through flood waters. As he put it: “If the road is flooded, forget it.”

Unfortunately, however, this is advice often ignored. Research on psychology and floods reveals clues as to why.

Why we risk it when flood strikes

As a type of emergency or hazard, floods are particularly challenging for emergency service agencies due the familiarity many Australians have with water, which we mostly associate with leisure and recreation.

The all-too-frequent examples of surfers entering storm swells and the use of boats and water equipment in flooded areas highlight this cross-over of recreation into hazardous conditions. Two of the most common causes of fatalities during floods result from play activities in water courses and attempts to drive across flooded rivers and streams.

This tracks with data from our recent research.

Our recent national survey asked participants about their behavior with flood waters. We found 19% had engaged in activities in flooded rivers, with 77% of these doing so for leisure purposes such as wading, swimming or riding an inflatable.

Over half those surveyed have driven through floodwater, with most of these (68%) having done so more than once.

Men and drivers of larger vehicles are most likely to take these risks. During a single flood event in NSW in 2016, 80 cars became stranded and three drivers died in unrelated incidents linked to driving through flood waters.

While playing in or driving through flood waters are avoidable risks, the latter involve adults who generally know the risks—much to the frustration of emergency authorities. So what convinces people make risky decisions in a flood?

Drivers in our study reported that they saw a majority of people in other vehicles (about 64%) driving through the floodwater, while only 2% were turning around.

Seeing others do something often leaves people with the impression this behavior is typical and relatively safe, an effect known as “normalcy bias.”

In 15% of cases we studied, passengers also put pressure on drivers to cross.

When things go wrong, they can go very wrong

Another key reason involves prior experience and perceived probability of adverse outcomes. While 9% reported a negative outcome (such damage to their car or having to be rescued), 91% reported proceeding without any incident.

The reasons for these crossings were not sudden or impulsive, but often involved what the person saw as “careful consideration” of everyday needs—such as the need to get to work or buy groceries.

This presents an obvious challenge for emergency authorities. While most people succeed without issues, the cases where something goes wrong can be catastrophic and in some cases fatal.

So, how do we convey the very real risks of floodwater? How do we highlight the need for people to prepare an evacuation plan and avoid entering floodwater?

As events unfold in the Hawkesbury-Nepean area in Western Sydney, it’s clear engaging communities in flood risk is challenging. That’s especially true when recent floods haven’t been too serious and people have encountered flood waters before without issue. Unfortunately, past experience is not a predictor of future outcomes.

As part of the NSW government’s Hawkesbury-Nepean valley flood strategy, considerable effort has been made in recent years to work with local communities and craft area-specific flood risk messaging.

In 2019 and 2020, the NSW SES launched their Floods. The Risk is Real campaign to increase flood awareness in the region.

The campaign personalizes the message by using billboards with local landmarks showing flood can occur in that specific area. This campaign also incorporates interactive flood mapping and augmented reality to show people what can happen when flood strikes.

Work led by Infrastructure NSW has also included a focus on specific communities that are perceived to be at higher risk.

One of these groups is large animal owners. The Hawkesbury-Nepean floodplain is home to an estimated 10,000 horses. Relocating animals takes time and planning. It can potentially lead to more road congestion and slow down flood evacuation. The government is targeting messaging to these animal owners so they understand how far in advance they need to plan and execute an evacuation when heavy rain arrives.

In 2019 the NSW SES, with support of the NSW Department of Primary Industries, Greater Sydney Local Land Services and local councils launched a website devoted to supporting and educating animal owners across the state.

It’s hard to know now what effect this work is having in the Hawkesbury-Nepean region, but it will hopefully pay dividends in future.

The significant flood event currently underway in NSW highlights the need to reinforce the risk communication messaging already in place and build on it in future.