Temtem will be getting a nuzlocke game mode where monsters will be released from the player’s team once they faint in battle. The game, which is set to be updated throughout 2020 and beyond, will also get player-controlled dojos and new Temtem, according to a roadmap posted by developer Crema.

In addition to the short-term roadmap released in late February, Crema has now also shown off the company’s long-term plans for the monster-collecting MMO. Before you dive into the upcoming announcements, keep in mind that Crema does say this is subject to change, and dates and content may not stay 100 percent accurate.

In Winter 2020, there will be around 30 new Temtem, a second mythical Temtem, dojos that players can “conquer and hold,” as well as improved ranked matchmaking and spectator mode. In spring 2021, Temtem will port to consoles and the game will officially have its 1.0 launch, as well as the release of a cosmetics store, an end-game island, and quests that’ll repeat daily and weekly. Summer 2021 has a nuzlocke mode slated for release, as well as a third mythical Temtem, and a cosmetics battle pass. Both the cosmetics store and the battle pass will cost real life money, not Temtem’s currency. 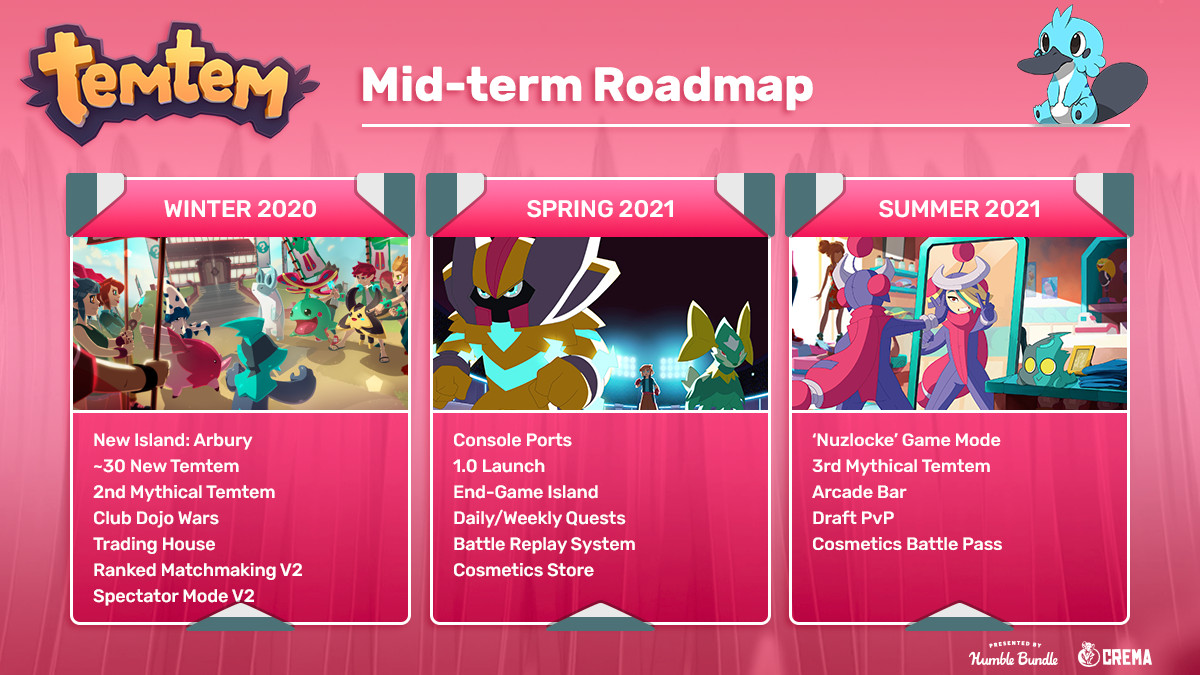 For those who aren’t familiar, nuzlocking is a custom Pokémon game mode created by fans that mostly uses the honesty system. There’s no formal mode for it in the games, but the rules require that if your Pokémon (or in this case, Temtem) faints in battle, you have to consider it “dead,” and you can’t use it anymore. You are also only typically allowed to catch the first monster you encounter on each route or area. There are also variations where you can’t use items, have to nickname your monster, or have to kill any Legendary monster you see.

Temtem’s version of nuzlocking will permanently release any of your Temtem that gets knocked-out, and it’ll limit how many Tems you can catch per area. This mode will be available on an entirely different server.