After several leaks about a new battle royale game, Activision has finally unveiled Call of Duty: Warzone. But the latest Call of Duty game is more than just a new entry into the battle royale genre. It also adds another mode and a few twists on the familiar BR mechanics. While there are still a few mysteries around Warzone, we’ve got answers to the most important questions.

What is Call of Duty: Warzone?

Warzone is a new Call of Duty game that is loosely connected to Call of Duty: Modern Warfare. The game is standalone and free. Players who already own Modern Warfare can access it through that game’s menu. For most players, the main draw is its battle royale mode.

When does Call of Duty: Warzone come out?

Here’s a handy map that Activision released to help you track some of the other time zones: 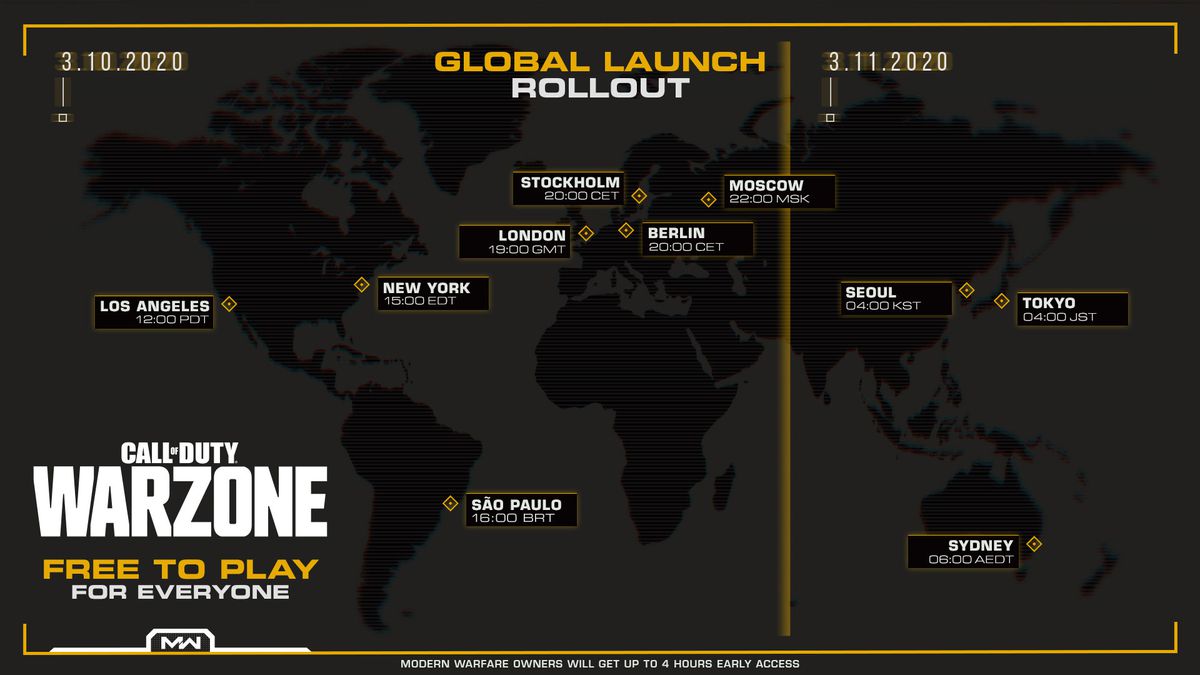 Warzone’s map is called Verdansk and it’s huge. It has several different cities and named landing areas, and according to Activision it has more than 300 points of interest as well. Verdansk is big enough that Warzone’s battle royale mode will support up to 150 players in every match. Based on what we’ve seen of the map so far, it seems like it will contain portions of Modern Warfare’s standard multiplayer maps inside of certain areas of the Verdansk, so it’s sure to look at least a little familiar to Modern Warfare players.

There are vehicles on Verdansk. In fact, there are five different vehicles in Warzone. Here’s Activision’s description of each one:

Cargo — holds the squad plus equipment, excellent protection, not for off-roading, slowest.

Is it just a battle royale game?

Warzone also features a game mode called Plunder which will have players competing for in-match cash. Whoever has the most cash at the end of the game wins, As of right now, it’s not clear how many players will be able to compete in a Plunder match at once.

What is the in-match cash?

Cash will be in both the battle royale mode and in Plunder — where it’s the main objective. Players can collect it by randomly looting around the map, killing players and taking the cash they find, or by completing contracts. Players can use cash to purchase items at buy stations scattered around the map.

Contracts are small missions that squads can complete in each match. These could include things like Scavenger Contracts, which instruct players to find and open a series of Supply Boxes, or Recon Contract where players have to secure a certain location. Once players have completed a Contract they’ll get a reward, which could include anything from cash, to loot items, to special abilities, like being able to see where the next circle will be.

What are the buy stations?

These are small locations spread out around the map where players can spend their hard earned cash. These will over players kill-streaks, self-revive kits, and other items including the Redeploy Tokens which will let you bring a fallen comrade back to life — though that isn’t the only way to respawn in the battle royale mode. In Plunder, players can also visit buy stations to deposit some of their cash, so they don’t risk losing everything if they get taken out.

Is there cross platform play?

Just like in Modern Warfare, there is cross-platform play for Warzone, which means that players on PlayStation 4, Xbox One, and PC will all be able to play together.

Will my Modern Warfare progress carry over?

Yes, all progress including levels and cosmetic customization will carry over from Modern Warfare to Warzone. Modern Warfare’s battle pass items will also carry over. For players who don’t already own Modern Warfare, all items earned in Warzone will transfer back to Modern Warfare should they ever decide to buy it.

We’ll have more coverage on Warzone in the days ahead.