Note that this contains spoilers for the entire of Attack on Titan up to season four, episode 25.

In anime years, Attack on Titan is an old dog. First airing in 2013, it quickly shot to the front of the cultural zeitgeist in its heyday, but has since been supplanted by the likes of My Hero Academia and Demon Slayer. Despite that, it's been steadily pushing its way through Isayama's often problematic story, and is rapidly approaching the conclusion fans have been waiting almost a decade for.

For such a long-running anime, you'd be forgiven for thinking the show had sunk into something of a routine. Instead, animation studio MAPPA, who took over the reins from WIT for Attack on Titan's final season, suddenly gave us one of the most beautiful, poignant episodes of anime ever released with Night of the End.

A quick catch-up for those who fell off Attack on Titan: Eren Jaeger has finally gained control of the Founding Titan and used its power to unleash the thousands of titans on the world outside of the island of Paradis in an apocalyptic event known as 'The Rumbling'. Eren's goal is clear: he wants mass genocide of everyone other than the Eldians on his home island, and is willing to crush them all under his titans' feet to achieve it. Eren's former friends and enemies, including Armin, Mikasa, Reiner, Gabi, Finger, and Hange, have all agreed to an uneasy alliance to stand against him and his murderous Jaegerist supporters. This is where we find ourselves now. 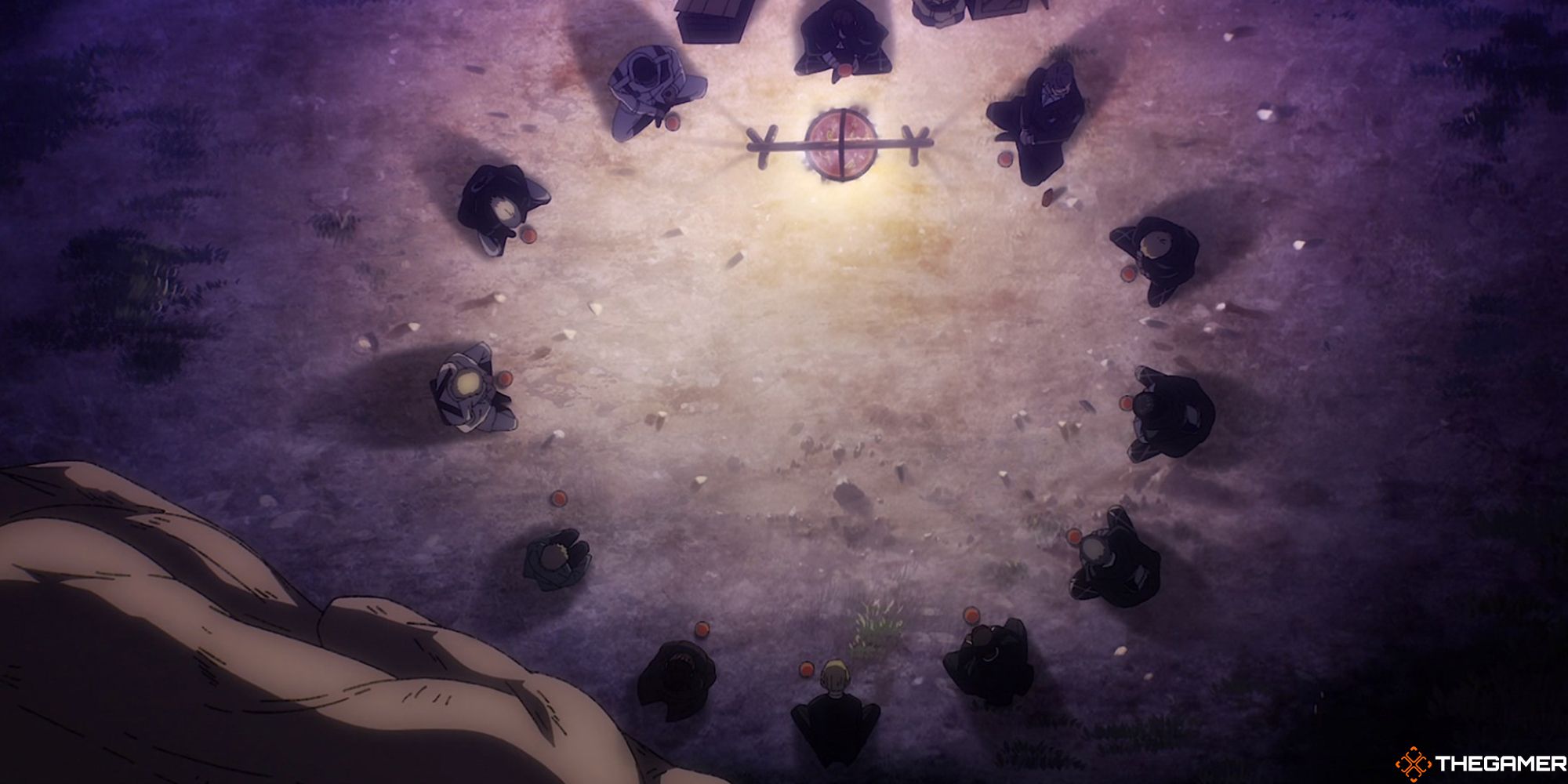 The Night of the End feels like the quiet before the storm. The new-found alliance has gathered in the forest to develop a plan, although they must first try and come to an understanding against insurmountable odds. After all, this group has killed and fought against each other for years, and there is plenty of bad blood on both sides. Magath of the Marleyan army is still held back by his jingoistic hatred of the Eldians, while Jean and Conny both struggle to forgive their former friend Reiner for his betrayal as the Armored Titan that shattered all of their lives.

The entire episode is a crucible for this group of former enemies. Alone, in the woods, it's a literal trial by fire as harsh truths are told while the group tries to put the past behind them in the face of a bigger threat. But instead of presenting this through the usual anime methods of loud shouting and intense fighting, the episode uses subtle visual direction, 'camera' placement, and shot sequencing to make something that feels radically different to anything Attack on Titan has done before. 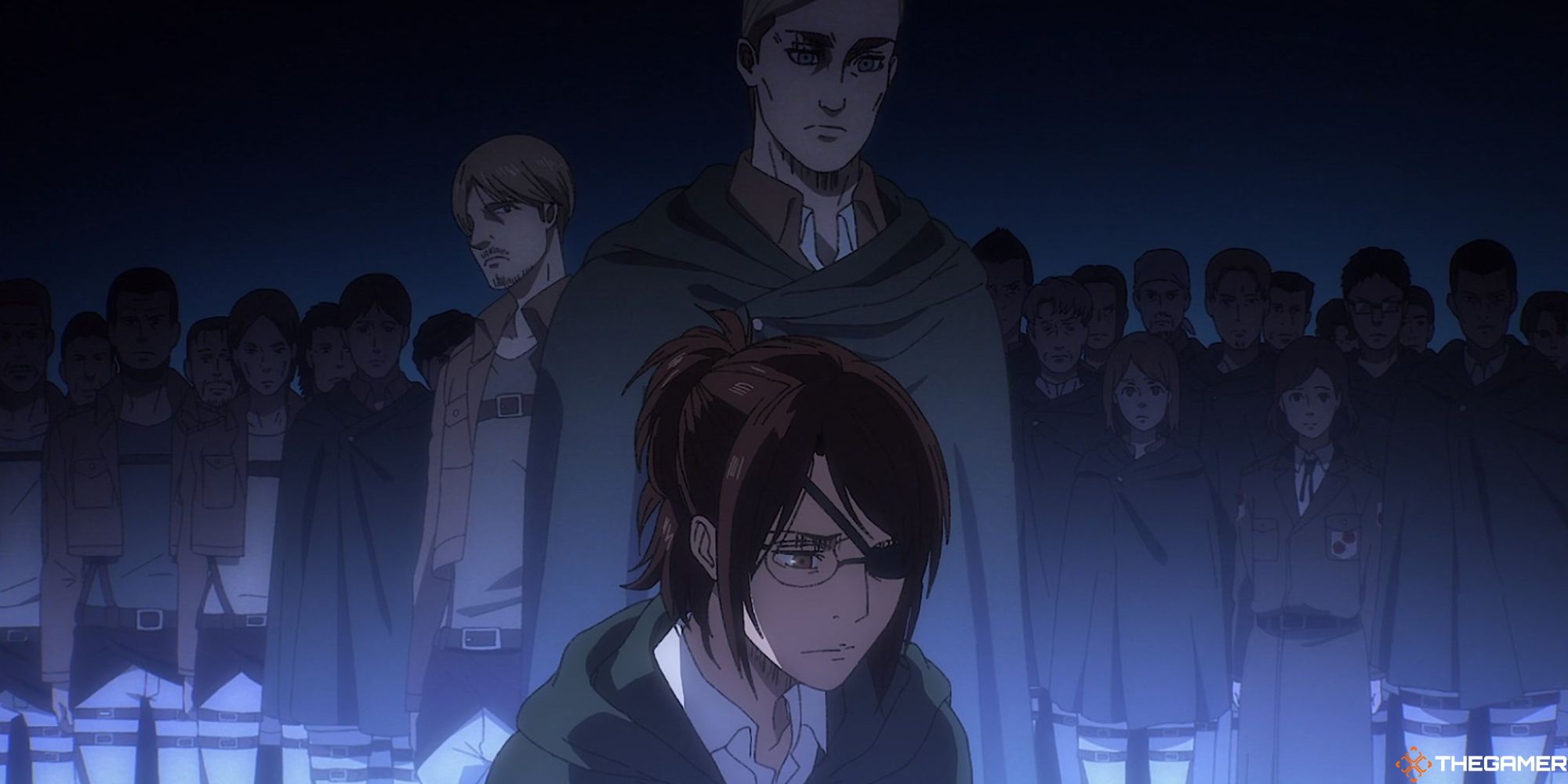 For example, early in the episode we see Jean’s dream of living in safety as a member of the Jaegerists with his 'wife', who is heavily implied to be Mikasa. That dream is cut short because he knows the right thing is to fight against Eren, and we're suddenly plunged into dark barracks with Mikasa beckoning him through the window. We're then given another jarring sequence with Hange, showing the heavy weight placed on their shoulders as the commander of the now-defunct Survey Corps. We see the ghosts of characters who died as far back as season one looming behind them.

Though Attack on Titan has dealt with visions, memories, and lies quite a lot, it's never really done this kind of psychological exploration of its characters in such a visual way. We've never fully explored Jean's desire to live a safe and cushy life, but here it is in the bright, friendly colours that so heavily contrast with the destruction happening outside. 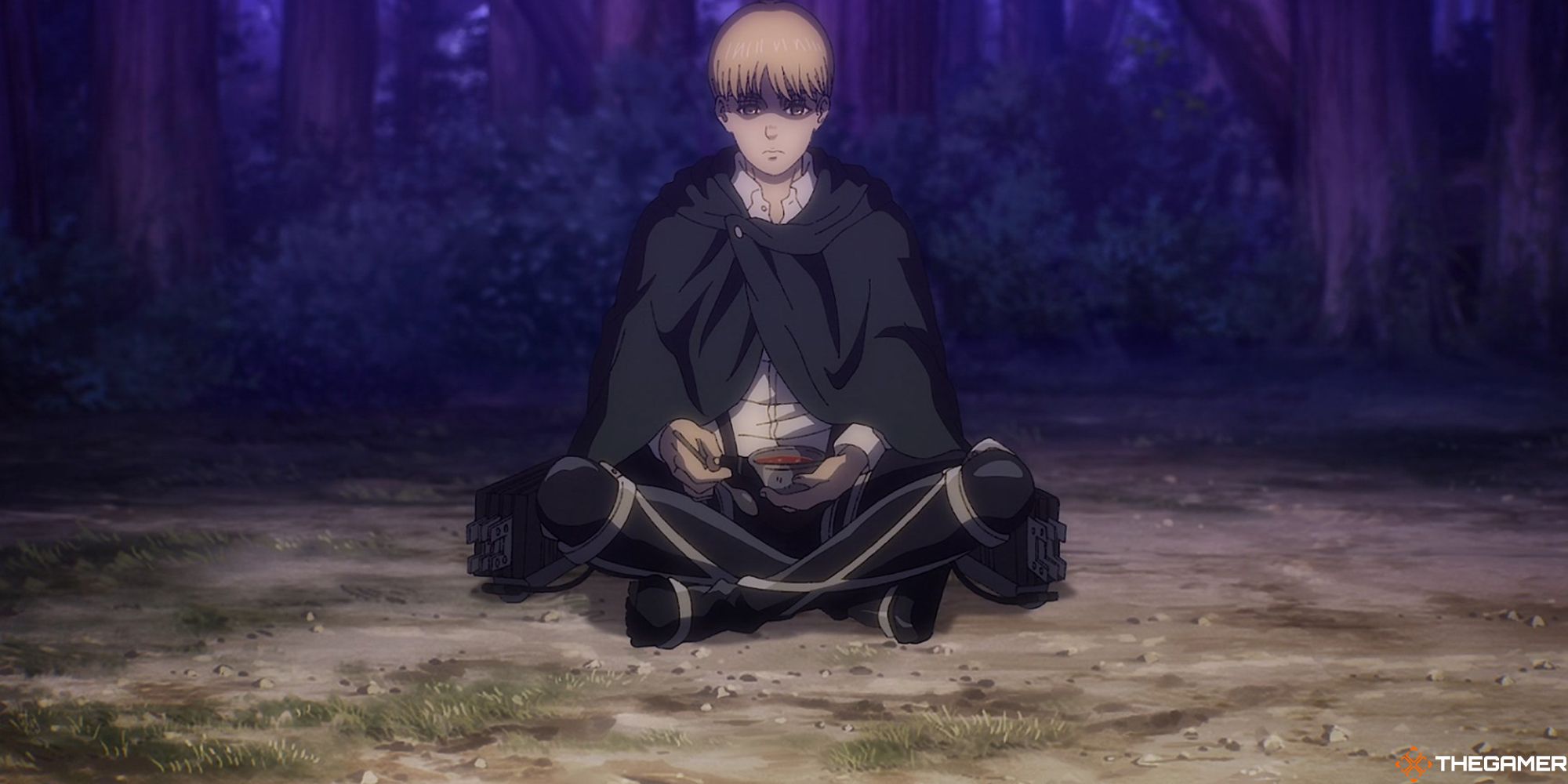 Then we get to the peak of the episode, where the alliance tries to have a meal together, hidden in the woods beside a bonfire. Despite the calm music and lack of blood-spurting action, this is easily the tensest scene in Attack on Titan's four seasons, and it's thanks to Mappa's inspired cinematography. Instead of following normal conventions like the rule of thirds, many shots frame the character alone in the dead centre of the screen to show how alone they are in their decision and motivations to fight against Eren. It's only in the moments where emotions flare where we see more than one character at a time, drawing the proverbial battlelines that could tear this ad-hoc group of fragile allies apart. 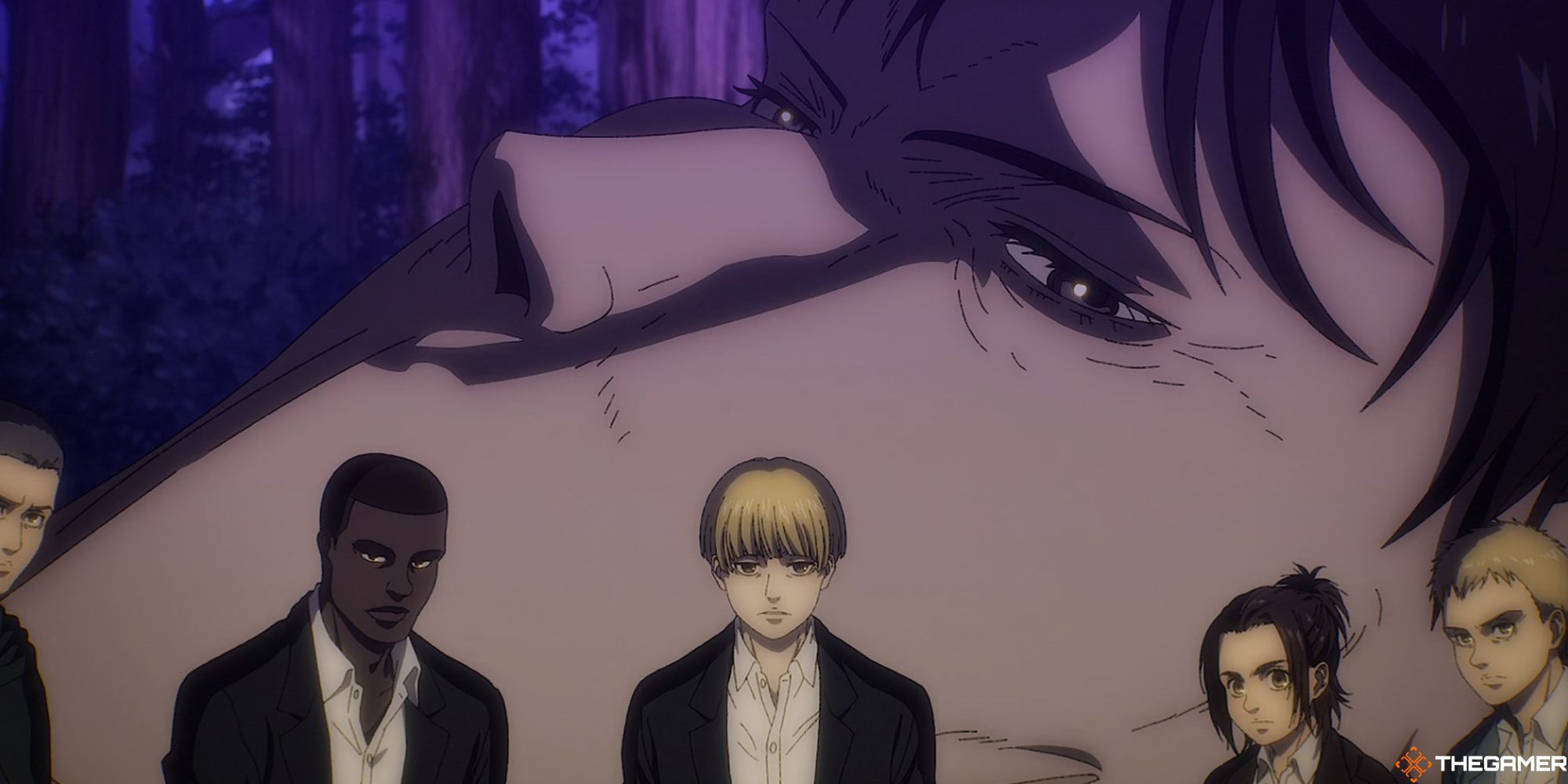 And when those tensions mount, it isn't the music that changes – there's very little of it in the entire episode – it's the pacing of the shots themselves. When Jaegerist Yelena, who has been unwillingly taken in by the alliance, mentions Jean's old friend Marco, who died back in season one, the scene rapidly flickers between various shots in total, deafening silence. Instead of feeling the need to convey the spark of rage inside Jean through a musical sting or a character gasping, Mappa does it with just a few quick, sharp shots of a bottle and a tightly-gripped bowl of stew. It's a family meal in the moments before an argument erupts that triggers your fight-or-flight response, and it's used to amazing effect here. 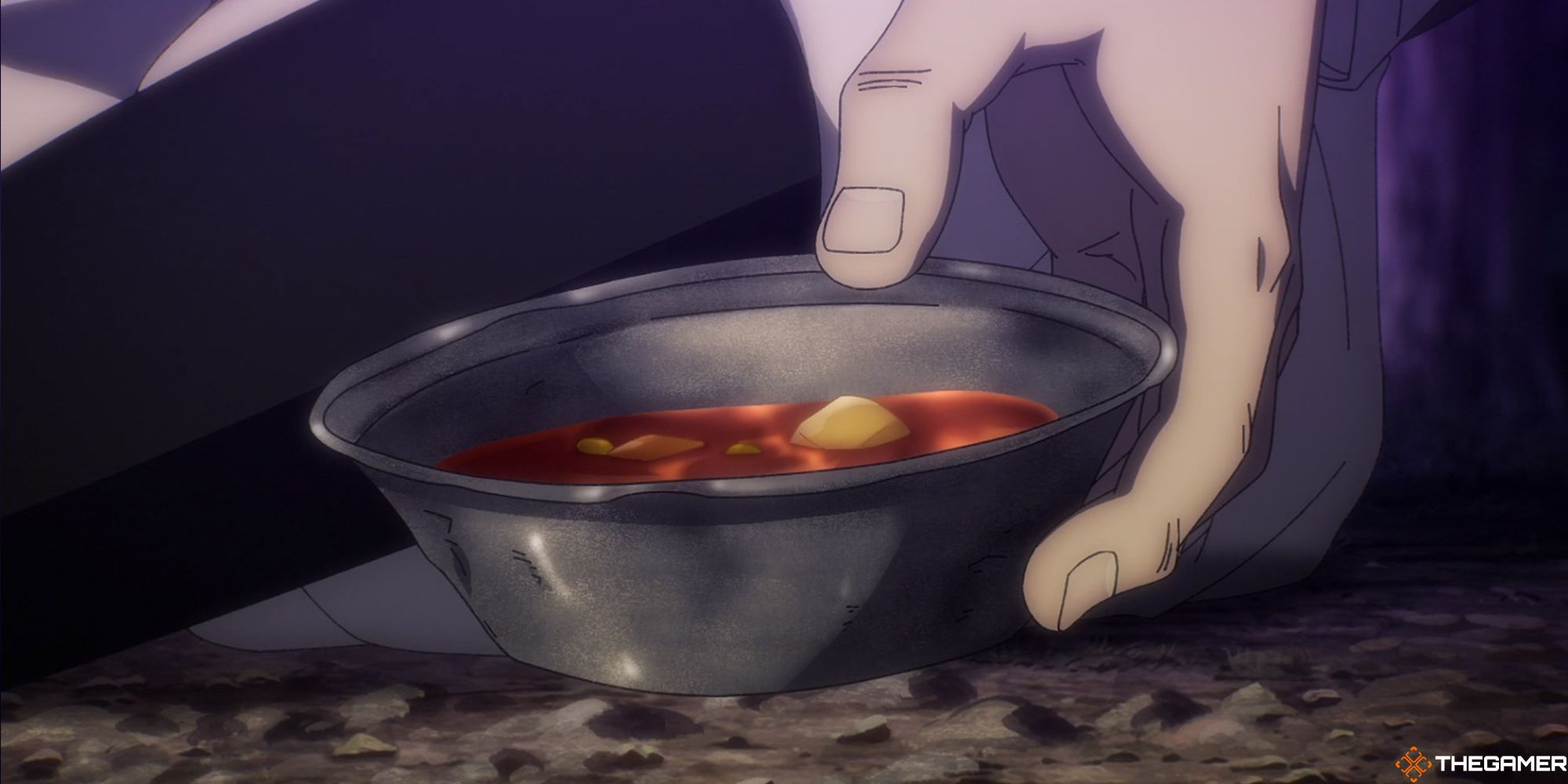 One of the big themes of the episode is how pointless revenge can be: this is one of the first times since Reiner's betrayal that characters like Jean and Conny have been able to confront him, and it isn't a high-octane fight that fans may have wanted. It's a quiet, embarrassing scuffle by a campfire that ends with a little girl getting kicked in the stomach. It's messy and gross and nasty, with no catharsis to be found. But it was vital for the growth of these characters, and us an audience as we realise that all the violence and death that has happened before ultimately doesn't matter now that Eren is ending the world.

By the end of the episode, a new, quiet understanding has been found between the two sides. There's no forgiveness. Magath still hates the "devil" Eldians, and Jean bluntly states he won't apologise to Reiner for his brutal attack. But as the sun rises and the group set off to fight the biggest threat the world has ever faced, there's a sense that something has been left behind by the campfire in that forest. 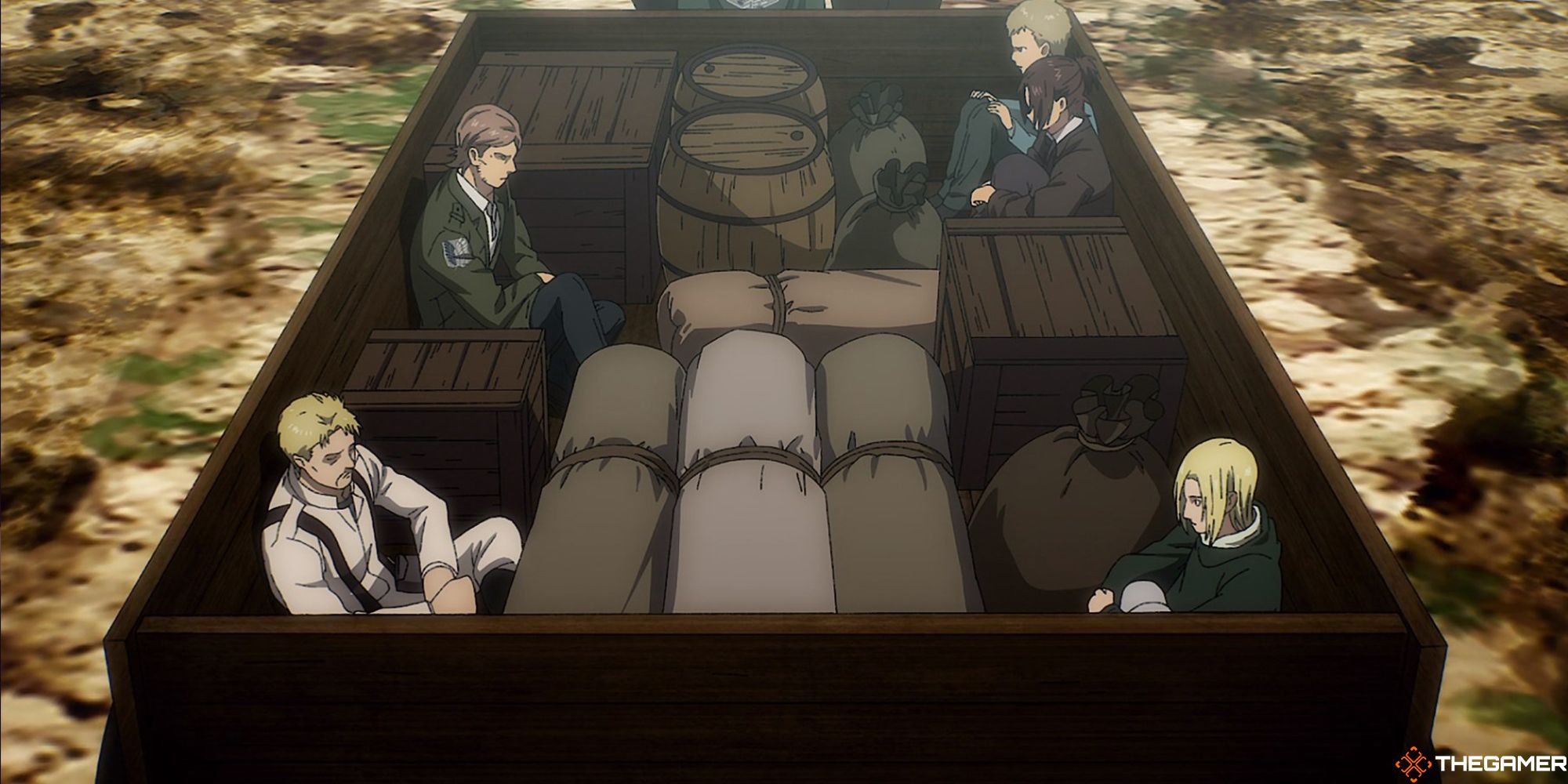 In a genre known for its frequent outbursts of emotion and by-the-book storytelling methods, Night of the End was a 20-minute masterclass of what anime could and should be doing. It played with music, tone, and camera just as much as it usually plays with animation and voice acting, and it stands out as not just the best episode of Attack on Titan, but potentially as one of the best individual episodes of anime ever produced.