The great triumph of Deep Rock Galactic is transforming drudgery into something thrilling, repeatable, and fun. You work for a corporation that cares more about minor profits than your survival. You are sent into dark caves to hack away small quantities of minerals. And your rewards are paltry compared to the risk you face, squaring off against massive alien bugs that hunger for your flesh. Yet as a stalwart space dwarf doing what he does best, you’re having a grand time, because the game’s systems contrive to transform that work into something magical.

One big reason for that is the smartly structured approach to cooperative play. Deep Rock Galactic may be played solo, with the help of an A.I. drone to aid in your mining efforts, but it’s profoundly less enjoyable. The game is at its best with a full four-person team of miners working together, ideally with a full spread of the available classes. Thankfully, a fast and responsive backend allows for quick joining or hosting of sessions, so good grouping is possible even if your friends aren’t around.

The four classes are thoughtfully balanced and play well together, complementing each other’s skill sets. The Scout’s speed, flare gun, and grappling hook get him quickly to where he needs to be. The Driller’s tunneling capabilities expedite any endeavor or escape, and his flamethrower is a crowd control boon. The Gunner’s weaponry holds the line in any fight, and his zip lines make team navigation manageable. And the engineer’s platform creation enables the mining of spots that might otherwise seem impossible to reach, even as his automatic turrets help hold specific control zones. Taken together, each adds something invaluable to the group, and I enjoyed my time with each.

In any given mining run, your space mining crew is sent hurtling into the depths of a mineral-rich behemoth of a planet, which also just happens to be overrun by hostile alien bugs. Sometimes you’re just there to collect a particular type of rock, but other objectives keep things interesting, from eliminating particularly nasty foes to retrieving the goods left behind by a previous mining crew that didn’t make it out. Secondary objectives lend an interesting risk/reward dynamic, adding time and danger in the depths, but with significant boosts to your payout. And as you climb the ladder of harder missions, there are other secrets to uncover, from hidden cosmetics in long-lost collapsed caves, to challenging “machine events” that throw in an extra challenging combat exchange. With a pickaxe in hand, there’s a satisfying balance in each mission between figuring out how to reach that elevated gold vein, and then switching gears to stave off a horde of attackers. Battles are intense and challenging, and demand constant teamwork.

Regardless, the procedurally generated cave systems are fascinating and expansive. The game encourages a focus on discovery and exploration – the mapping and objective markers are limited. That’s frequently a ton of fun, leading to moments of excitement as you smash through a dirt wall to find a massive crystalline chamber just beyond. However, at times the focus on freeform wandering can lead to a sense of aimlessness. Likewise, the game makes great use of light, as the dwarves send out rechargeable flares (or the scout’s longer-lasting flare gun blasts) to survey the area. But the overriding sense of oppressive darkness can wear thin after a time, and the shifting light sources mean that it’s easy to get lost.

In between work shifts, your time back on the space rig features some fun interjections, especially when shared with others. You upgrade a beer brewing license with newly discovered materials, letting you toast each other before a number of silly effects take over, like lighting you on fire, or changing your size. Some drinks can even offer a buff for the next mission. You’ve got a place to dance a dwarven jig to the nearby jukebox, and a button to turn off gravity in the station for a time. Or how about you just kick some barrels around? It’s all frivolous and amusing.

This space station is also where you gradually upgrade your miner’s equipment as they climb through the levels. Consistent play leads to an array of perks, but most of them have only minor effects on the chance of success. A few unlockable weapons await each class, and an array of upgrades for armor and the rest of your arsenal. However, many of the most important upgrades are acquired in the early hours, and the focus shifts to a very slow cosmetic unlock path. I found myself wishing for some more meaningful options and customization after a time; the game demands many hours of investment to tweak your look to exactly the way you like, and more gameplay-affecting upgrades would have been welcome. You eventually open up “promotion,” which adds some new extended missions and a few additional upgrade options. With that said, the leveling curve is relatively flat, and characters of disparate levels can generally play just fine with one another, except on the hardest settings.

Minor quibbling about progression or navigation frustration aside, Deep Rock Galactic is consistently a great time, and highly replayable. The dwarves grumble and shout at each other, complaining about their lot, but happily tackle each new challenge with dogged determinism. It’s immensely satisfying to have your whole team empty out into a new cavern, and then immediately set to work chipping away at rock and bug alike. Even transplanted from their popularization in Tolkien or Snow White and into a dark corner of space, the essence of the dwarven fantasy is richly realized here, and consistently makes me smile. Bring some friends, a handy pickaxe, and a cantankerous attitude, and you’ll be smiling as well. 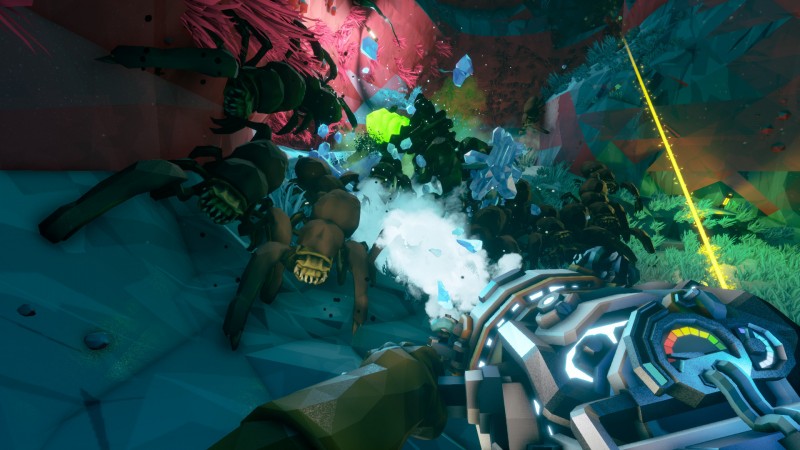 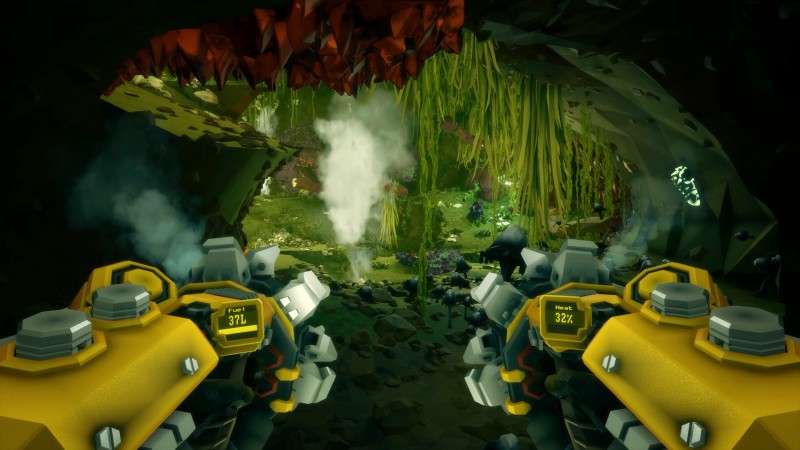 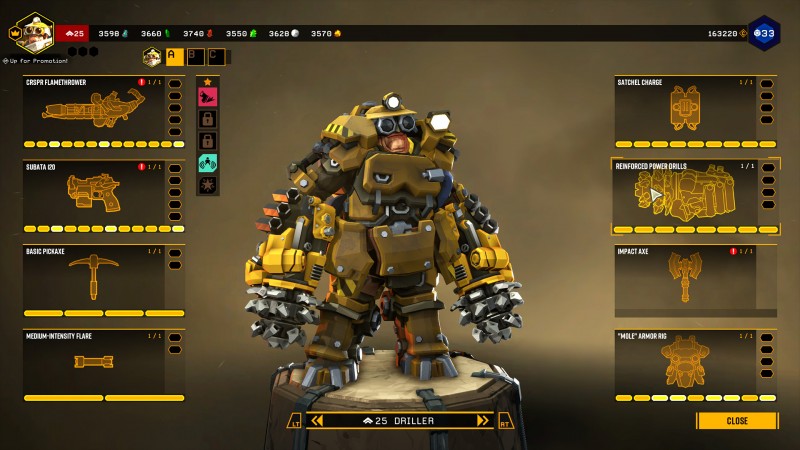 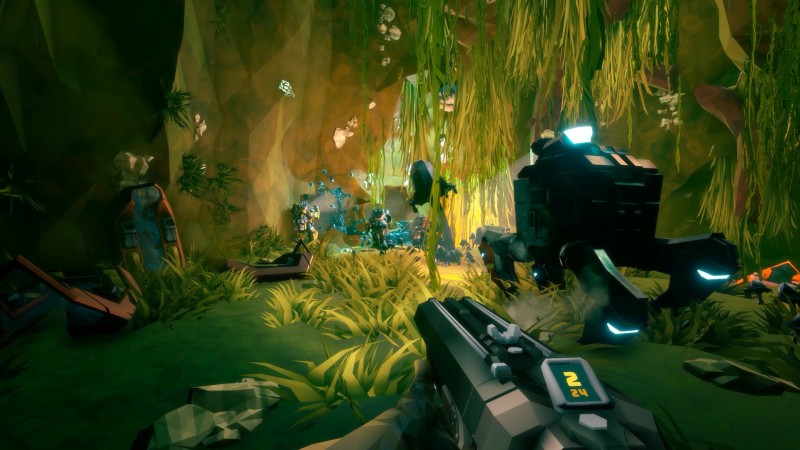 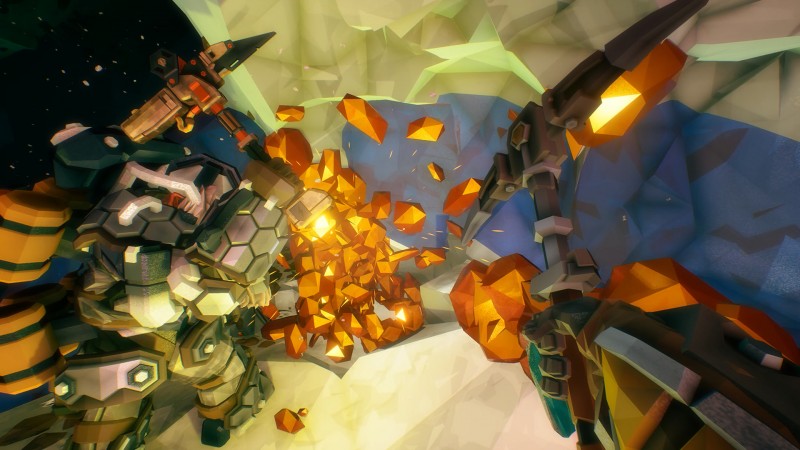 Tightly balanced between resource gathering and fierce shooting exchanges, this dwarven mining expedition is a great time – especially with friends.