Icewind Dale is once again at the heart of D&D with the new release Rime of the Frostmaiden. We can’t wait to get our mitts on a copy and visit the lands made famous by R A Salvatore in his debut novel The Crystal Shard in 1988. Join us as we explore the lands and some of the more notable locations.

Icewind Dale is a frozen wasteland to the North of the Forgotten Realms situated between the Spine of the World, a mountainous region to the east, and the frozen sea to the west. It is the farthest north explorers have ever gone, and with temperatures reaching as low as -12 degrees C, it is a notoriously difficult place to survive.

Our journey begins in Luskan, a town just south of Icewind Dale. To those unfamiliar with the region, it is considered to be the most northern settlement in Faerûn. Luskan is known for its trade, acting as a hub for the region, importing and exporting goods from and for the neighboring towns. It is also the gateway to Icewind Dale. From here it is possible to sail north-west while hugging the coast to reach the settlements of Auckney and Fireshear. It is even possible to reach the Dwarven city of Ironmaster during the summer months – but be warned, the dwarfs do not like outsiders trespassing on their lands. Watch out for their large menhir-like stone boundary markers, for if you stray, you will be lucky to leave their clutches with just the burden of your weapons and equipment taken from you. 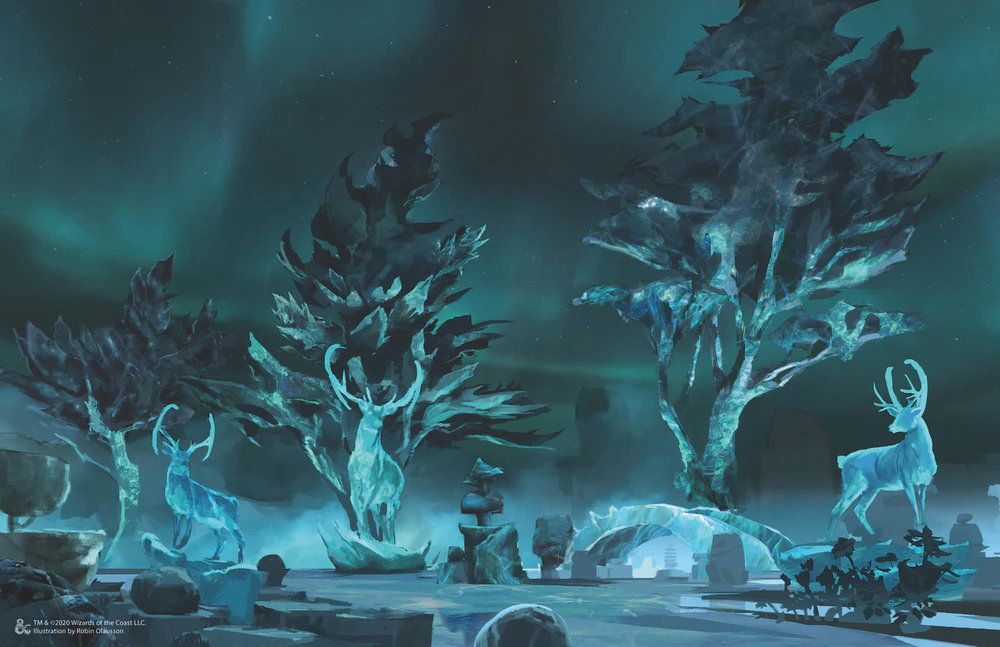 From Luskan we set out north following the Northern Means until we reach the Ten Trail. This is the main route in and out of Bryn Shander, the largest settlement in Icewind Dale, and the rest of the Ten Towns. As we continue along the trail we reach the mining settlement of Hundelstone. Inhabited by mainly dwarves and gnomes who carve out a living mining, they are joined by humans who look after the town and run the five guest houses, providing food and accommodation to those stuck during the winter months. They also serve as guides and guards to the passing trade, as well as monster slayers who keep the area and trail safe for use.

The Ten Towns are a loose coalition of settlements that surround the three lakes of Icewind Dale. There are no main roads, save for the Ten Trail, but the tracks between the towns are well maintained. To the north is Maer Dualdon and the settlements of Bremen, Targos, Termalaine, and Lonelywood. To the South is Redwaters and the settlements of Dougan’s Hole and Good Mead. To the East are the settlements of Easthaven, Caer-Dineval, and Caer-Konig. The residents are comprised mainly of humans, half-elves, and halflings, but you can expect to see them joined by dwarves and even orcs, living in an uneasy harmony when it suits.

Mountains, Tunnels, And Other Hidden Places

Just north of Caer-Konig lies Kelvin’s Cairn. Legend says that it is the final resting place of a frost giant known as Kelvin who was defeated in battle by the god of war Tempus. His corpse was buried and covered with giant boulders gouged out of the surrounding rocks. Kelvin’s Cairn has served many purposes over the years. It was the home to many dwarves until the rediscovery of Mithral Hall and is riddled with tunnels, remnants of their mining activity. Many of these tunnels had to be collapsed when the attacks of the evil wizard Akar Kessel threatened the area. It would also serve as his final resting place after accidentally unleashing a spell upon himself during his battle with Drizzt Do’Urden. A ghostly reincarnation of Kessel was discovered over 100 years later by explorers hunting for his corpse.

As we turn back and make our return to Hundelstone we are greeted by The Spine of the World to the West. This mountain range spans far past the borders of Icewind Dale, rising eastwards and protecting the land to the south from the frozen wildernesses of the Uttermost North and the Reghed Glacier. Of all the peaks, there are four well known; uncreatively referred to as Firstpeak, Secondpeak, Thirdpeak, and Fourthpeak. While impossible to fully traverse, that hasn’t stopped people from trying. There are a handful of settlements and defensive structures along the spine, with perhaps the most well known being Mithril Hall. Found beneath Fourthpeak, this dwarven settlement was lost to the dwarves following an attack by the dragon Shimmergloom (Haerinvureem). Of the 10,000 dwarves who inhabited the area, only 300 survived. who were forced to flee north into Icewind Dale. The land and Mithral Hall would later be reclaimed by the rightful heir Bruenor Battlehammer, assisted by his friends and heroes Drizzt Do’Urden and Wulfgar, and would once again become home for the dwarves. 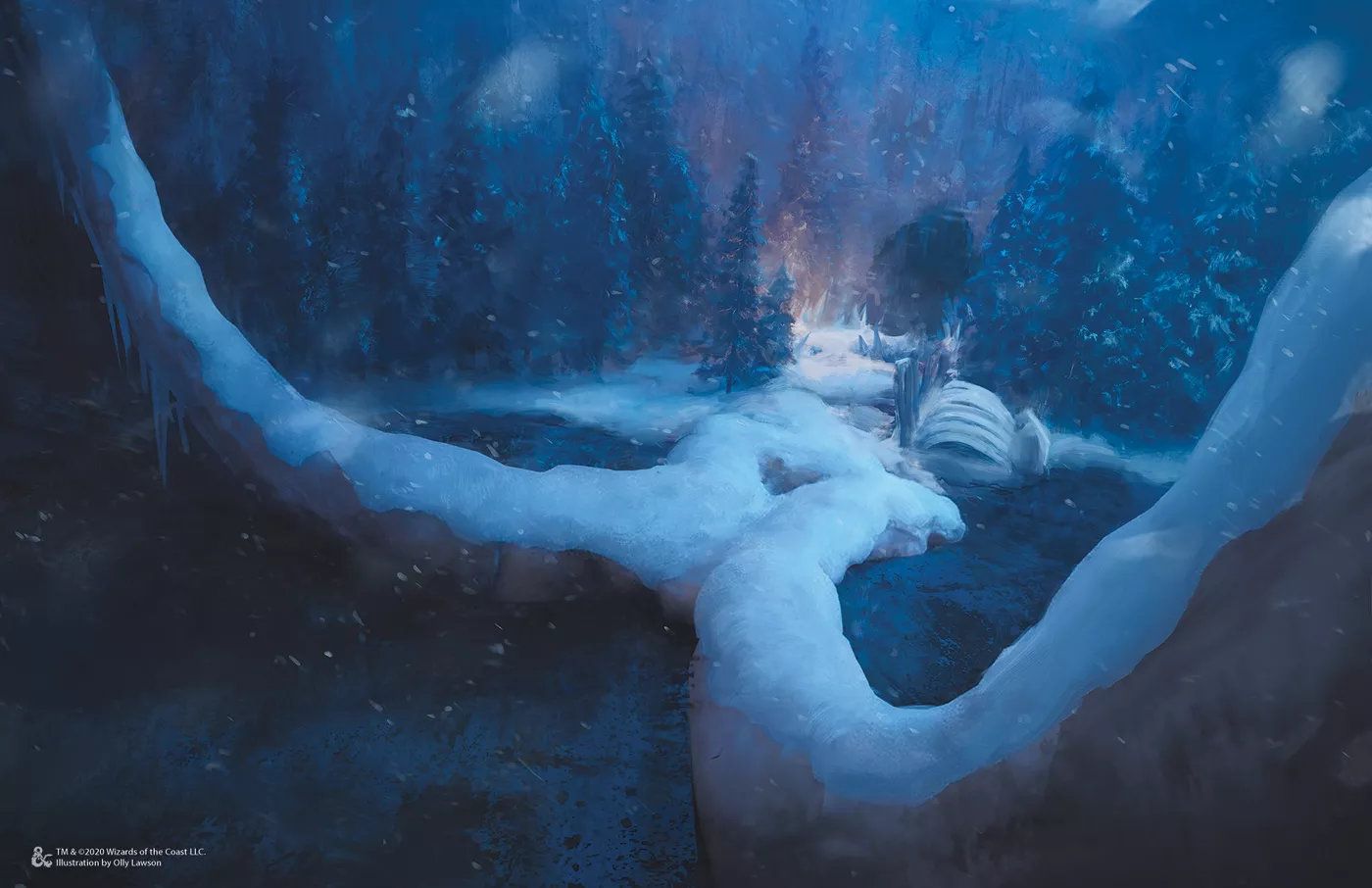 We continue south past Hundelstone and the road to Luskan, along the Ten Trail until we reach the coast and the city of Fireshear. From here we catch a boat and sale northwest along the coast until we hit Ice Peak Island which lies just to the west of Icewind Dale. The island’s main settlement Aurillsberg handles all the trade for the inhabitants, as it is the only one place with a harbor big enough to handle the larger ships that come from Luskan. Further north from the island we reach the Sea of Frozen Ice, a hazardous area prone to unpredictable freezing that can trap the unwary and become easy prey for the frost giant from nearby Svardborg, their home from which they mount raiding parties against nearby human settlements.

And so concludes our tour of the frozen north. Icewind Dale can be a treacherous place and travelers should take care not to wander too far from the tracks. The lands are home to an ensemble cast of undesirables; barbarian raiders, frost-giants, ettins, remorhazes, yetis, and even the terrifying white dragons. The citizens of the various settlements will welcome you in but expect to be watched carefully for they are wary of strangers.