This year sucks. There’s no getting around it. Even outside of the pandemic, everything is shit – everything but video games.

One such video game is Hades, a roguelike so good it’s got me playing my Nintendo Switch in every free moment I find. As soon as I finish work, I load it up and go for a few runs. By the time I’ve done two or three, it’s time to put my kids to bed and settle down for some TV with my partner. Every weekday for the past two weeks, this routine has been the same.

Hades, in case you haven’t played it, places you in the shoes of Zagreus – the underworld god of hunting and rebirth, son of Persephone and Hades himself. He’s attempting to battle out of Hell to reunite with his mother, but everything between his home and the exit atop Elysium wants to stop him. And so, you die.

You die over and over and are reborn repeatedly. Every run is the same, and every run is different. You know what to expect, but Hades’ Boon system – in which Olympian gods grant you special, randomised abilities – keeps everything fresh. Eventually, you brute force your way out, but Zagreus can’t live long above ground where the alien sun beats down on his unaccustomed skin. His reunion with his mother is short-lived, and so he goes again. And again.

Throughout these runs, you build relationships with the Olympian gods, the Chthonic gods, and the other denizens of the underworld. They remark on the slight differences of each attempt – what killed you, who you beat, what items you have uncovered. There’s over 20,000 lines of unique dialogue, and that’s the driving force that keeps you powering through a loop of: fight, die, talk, upgrade, fight. 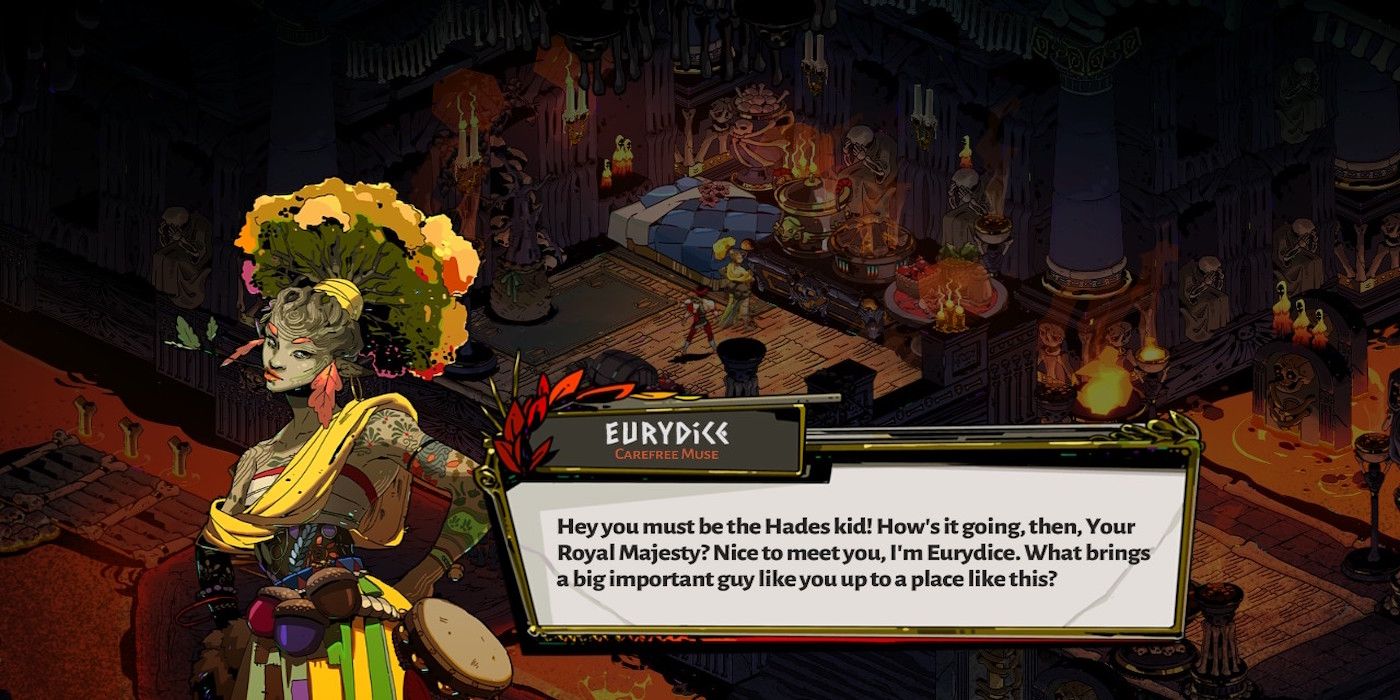 When you die, you emerge, blood-soaked, from the Pool of Styx. From there you talk to Hypnos, then you talk to Achilles, Nyx, Hades, Cerberus. You go to the item shop and see what’s on offer. You trade in your fish at the chef.

Conveniently, the place where you level up is right nearby, so you head into Zagreus’s bedroom and spend your resources at the Mirror, perhaps unlocking some more resources for ticking something off in the Book of Fates next to it. While you’re there, you might as well pop outside and upgrade your weapons. That’s right! There’s Skelly – let’s have another chat. Now the door to another run is right there. You might as well do one more…

Hades has sold over 1 million copies since leaving Early Access, and I think the reason it resonates now more than ever is because it is the perfect pandemic game. Here are some of the lyrics from Good Riddance, one of the songs from the game’s brilliant soundtrack:

To all the earthly remains

No further debts to be paid

Can rest his weary bones

The weight of the world

To all the plans that we made

I think most people can relate to that last line. This year hasn’t exactly gone as intended, has it? As the saying goes: man makes plans, God laughs.

We’re all locked in the same cycle as Zagreus. We’re pushing through each day, fighting our own internal battles, and we’re doing our best to maintain and deepen relationships with our friends and family, even though fate is keeping us apart.

Zagreus has never even met the Olympian gods who bestow their Boons upon him, but he’s learning about them in the same way we’re all jumping on Zoom calls or keeping in touch with friends and family via instant messaging apps. We’re maintaining and growing our bonds, despite everything trying to stop us. We all have someone we’re fighting for. Even the daily grind is a means to an end – to accrue more wealth to give our loved ones a better life, for dreams of distant holidays when this is all over. 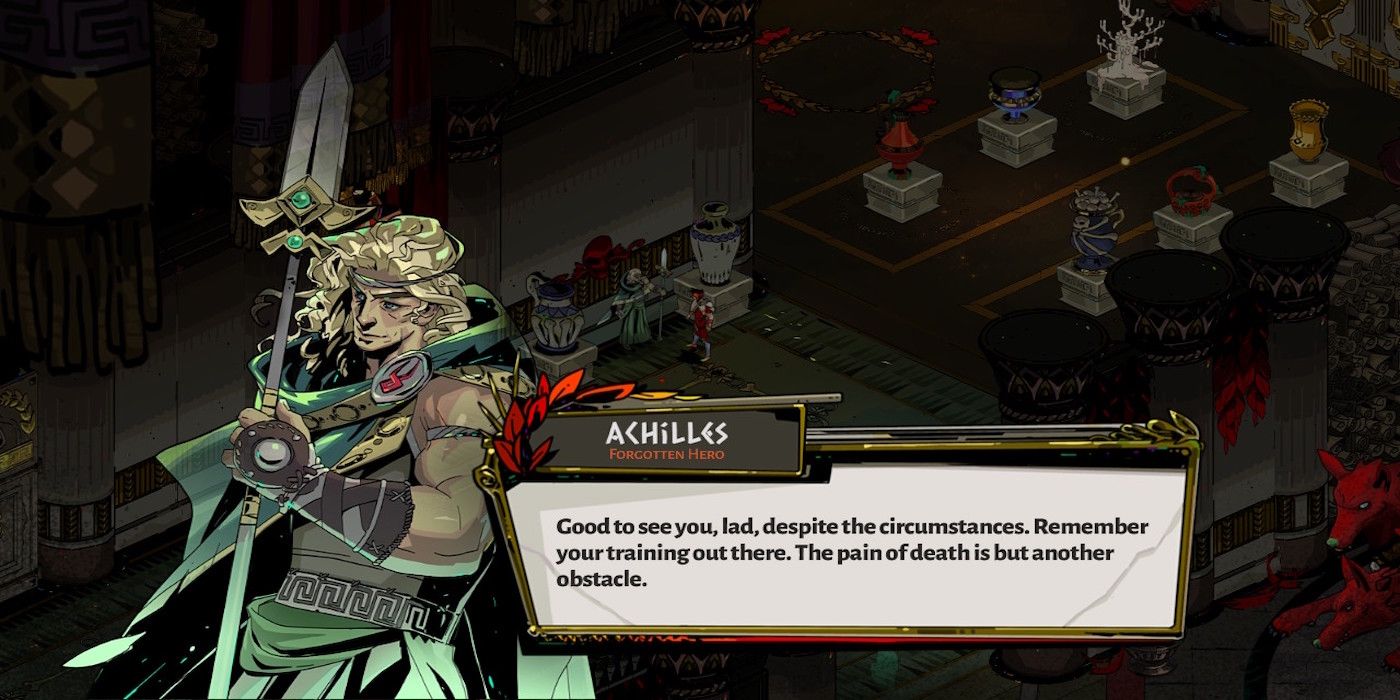 This theme runs through Hades, even outside of Zagreus’s own story. There’s Orpheus and Eurydice, two fated lovers who wish to be reunited. The pair share that song above – Good Riddance – and the lyrics take on a different meaning depending on who sings it. For Eurydice, it’s a song about moving on from Orpheus, while Orpheus sings about his regrets – the contract he violated that left him detached from his true love. Then there’s Achilles and Patroclus, warriors and lovers separated by the realms of the Underworld. Even Hades and Persephone have a more complicated history than it seems on the surface.

Hades is mechanically economical and thematically taut. That strong vision and commitment to its themes is why it’s successful – it’s the right game for the right time, selecting the exact Ancient Greek tales it needs to get its message across. Love is worth fighting for, and there are better memories waiting for you to unlock beyond the daily grind. Hang in there, Hades tells us. Life isn’t fair, but it’s going to be OK. There will be pain, there will be hardship, but our bonds will be stronger by the end. The weight of the world all falls away, in time.