I recently wrote about playing Skyrim as a pure mage, shunning weapons and other direct means of combat in favour of magic. But in my endless quest to find new ways to play Bethesda's immortal RPG, I wondered: what if I not only played as a mage, but dedicated myself entirely to one school of magic? There are five distinct spell types in Skyrim—Destruction, Restoration, Conjuration, Illusion, and Alteration—and they're all very different. But is it possible to play (and enjoy) the game using just one of them?

The easiest option would be Destruction. This school offers up a selection of powerful offensive spells, including letting you pummel enemies with fireballs and ice spears. But that would be too easy and not terribly imaginative. I ruled Restoration and Alteration out too, because they're both focused on defensive and healing magic. Conjuration could have been fun, summoning snarling demons from the deepest Planes of Oblivion to do my evil bidding, but being able to magic up enchanted weapons felt like a bit of a cop out.

So I settled on Illusion. This school of magic is centred around manipulating minds and making your character sneakier. It's handy for stealth-focused players—particularly spells like Calm, which temporarily prevents enemies from attacking you, and Invisibility, which is self explanatory. It's a powerful collection of magic, but not particularly offensive. Doubly so when, like me, you've decided not to use any weapons in combat.

Early on, Fury was my go-to spell. Casting this causes the target to fly into a rage and attack anyone nearby—including their allies. The effect lasts for 30 seconds, which is usually ample time for them to kill someone while I hide safely in the shadows and watch the chaos unfold. You can wipe out entire forts with Fury alone if you're patient, which admittedly isn't the most exciting way to play Skyrim. It's also useless, for obvious reasons, if you find yourself fighting a solitary enemy. If no one was around to make furious, I was stuck.

But then I hit a brick wall. I could muddle my way through most situations using Fury, or by sneaking past lone enemies using spells like Calm and Invisibility. But the rest of my spellbook was going unused, and I wasn't about to spend the next however many hours lurking behind bushes watching people kill each other. To get the most out of being an Illusion mage you need a companion. Luckily the game's full of allies, including mercenaries called hirelings. 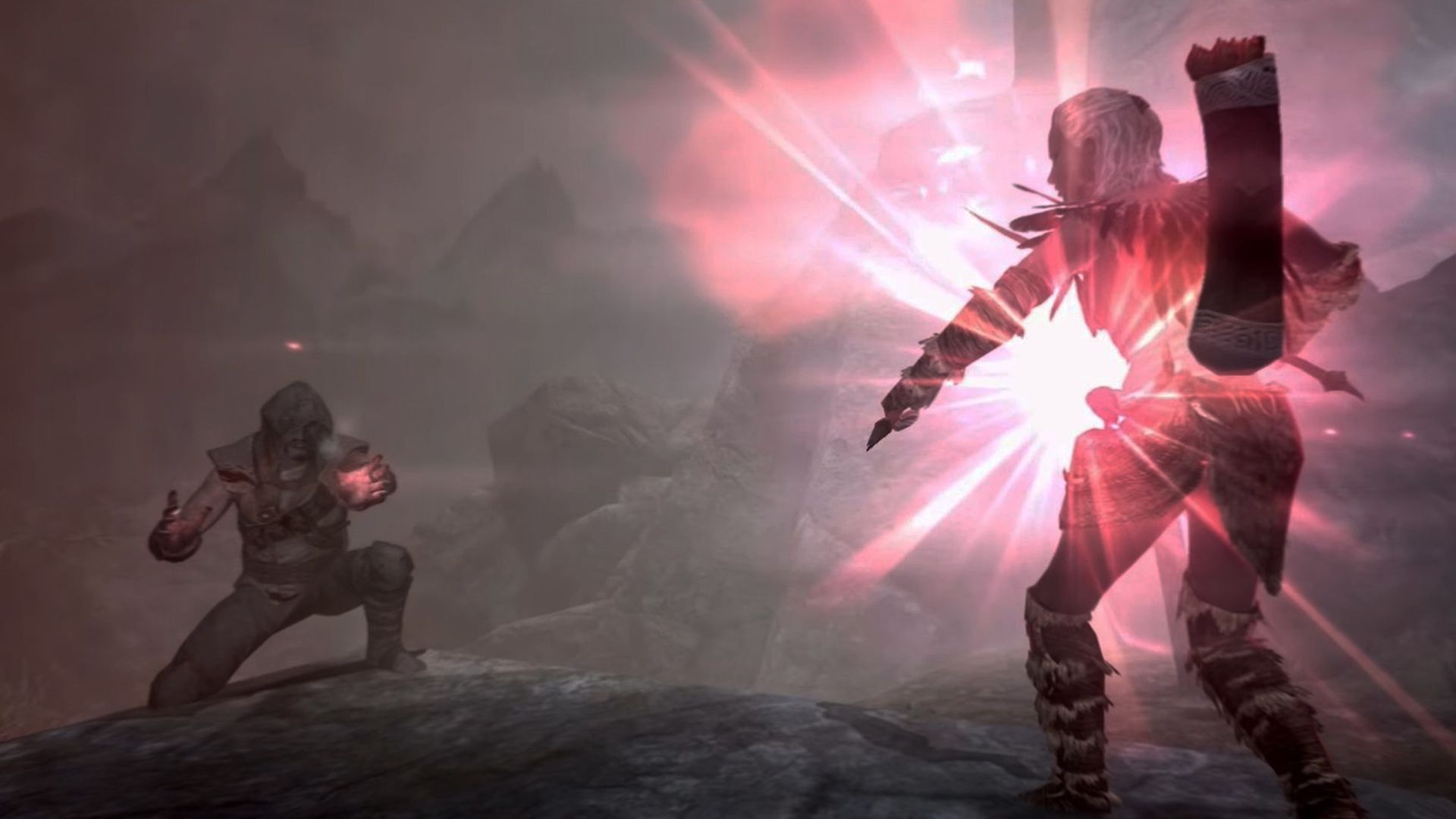 I threw some coins at a large chap named Stenvar, who was loitering in a Windhelm inn, to accompany me on my adventure. With his steel armour and two-handed sword, he had all the muscle I was sorely lacking. Now with this hulking great Nord in tow, I could delve deeper into my spellbook. Casting a Master level spell, Call to Arms, gave him a huge health and stamina boost, as well as increasing his two-handed weapon skill. This turned him into an absolute beast in battle. I could take on just about any combat challenge through him.

As your Illusion skill increases you can do some pretty cool stuff, including manipulating powerful enemies such as Daedra, the undead, and automatons, overcharging your spells, and making enemies flee in terror. It's never as satisfying as being a Destruction mage, especially if your companion dies midway through a dungeon and leaves you in the lurch. But it's an interesting way to play Skyrim, and a unique challenge that encourages you to engage with the game's systems in ways you normally wouldn't.

Focusing exclusively on a largely defensive magic school is challenging and occasionally quite tedious, but worth experimenting with at least once. Getting through a dungeon with just Fury, and no companion backing you up, takes a lot of time and quicksaving. But there are ways to game the system and reach higher levels more quickly, like spamming the Muffle spell to raise your Illusion skill. It's far from the best Skyrim experience I've ever had, but it's amazing I'm still finding new ways to enjoy this game a decade later.