[This article contains spoilers for Persona 5]

Persona 5 is a game about people, above all else. The premise of the game involves diving into the psyche of those who do wrong, understanding how they view the world, and ultimately plucking out a key object – the “treasure”- that facilitated the palace owner’s warped worldview. Generally, the targets are greedy and self-obsessed. Their flawed understandings of reality tend to place other humans as ‘less than’, tools to be used and abused. But one Palace poses the question: “Are there other types of warped perspectives?”

The fourth Palace in the game stands out among the crowd for several reasons, but chief among them is the fact that, for the first time, its owner invites the Phantom Thieves in herself. Futaba Sakura, who will later join the team, demands that the Thieves steal her heart. While they at first wonder if she can even have a Palace, the Phantom Thieves quickly learn that she does – and that it’s nothing like the others they’ve been in.

Futaba’s Palace, unlike all those before it, isn’t situated within the city. In fact, the Thieves have to drive through a vast desert just to get to the pyramid, despite entering from right outside Futaba’s real-world room. It drives in a sense of isolation. Not only has she shut herself off from the world, she’s done it so effectively that even imagining the world outside her room seems…pointless. The music inside is listless and low-key (although in true Persona fashion, it’s still a great song). 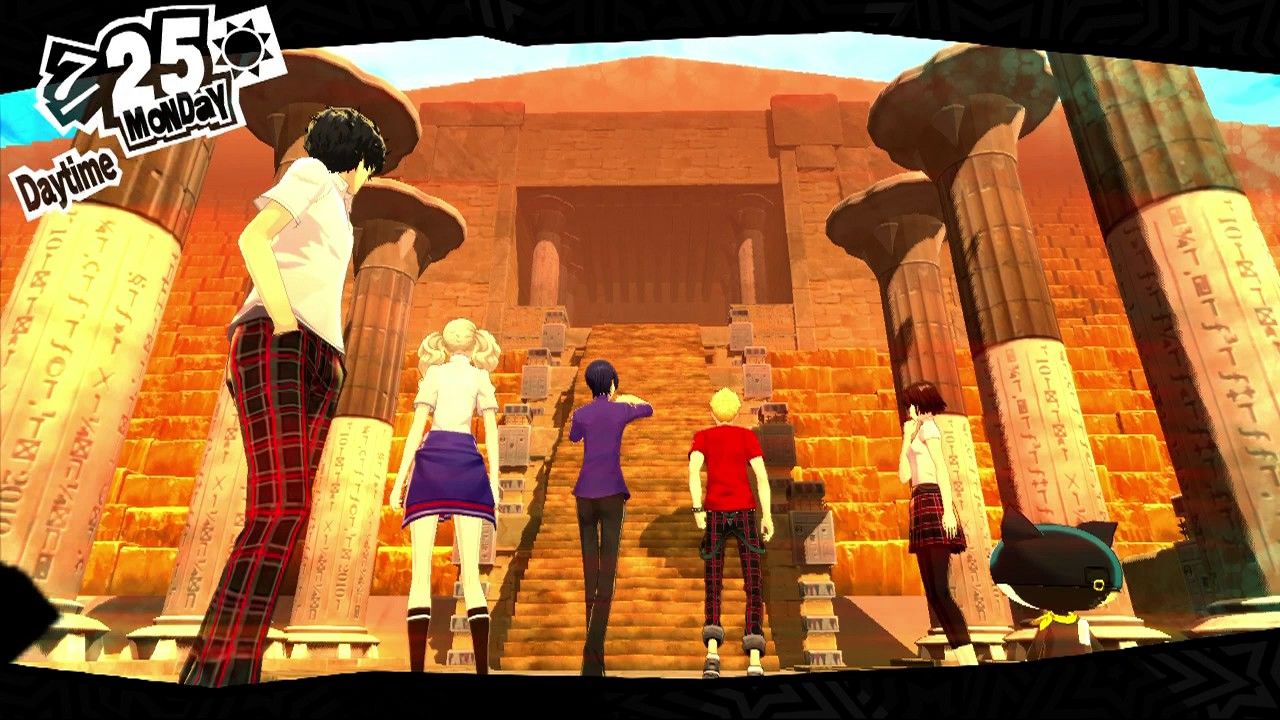 Fitting with Futaba welcoming them in, there seems to be a straight path up to the treasure room. Of course it turns out to not be so simple, but as you unlock the doors and re-climb the staircase, the progress from the front door appears very linear. This makes it easier to gauge how close you are to the finish line. But there’s also a lot about the Palace that conceals traps or, oddly enough, just doesn’t work. Areas of the pyramid are crumbling. The floor falls out from under you occasionally, and even the trap machines get jammed and break. It feels like even the building itself is lonely, in a state of disrepair and disarray.

There are primarily three types of puzzles in Futaba’s palace: navigating the ruins, inputting binary code, and solving fragmented pictograms. They serve to tell us about Futaba’s character, both directly and indirectly, as players solve them. Just like most of the other Palaces have the push-and-pull of progressing and backtracking, the pyramid is full of detours, patrolling shadows, and trick mechanics. The cursed gems being used to allow – or forbid – passage through certain locations was an interesting way of integrating backtracking without letting it look like restrictive or arbitrary level design. 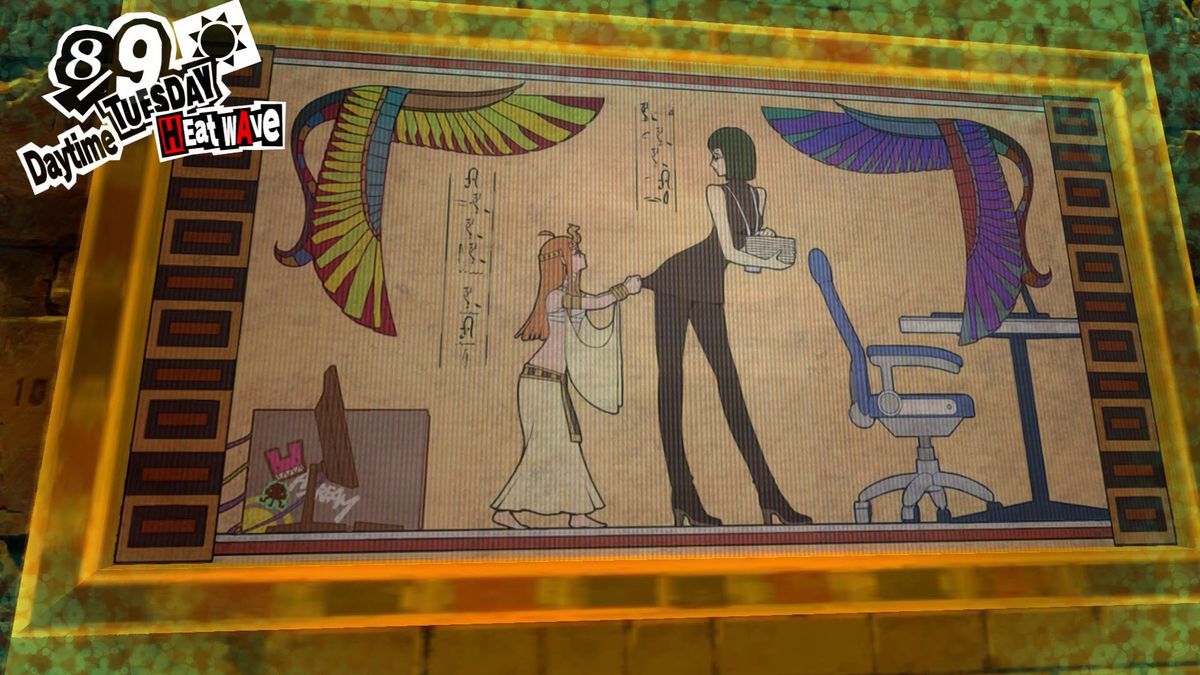 Combat is also interesting. The enemies here stick very well to the aesthetic, and they’re also some of the more status-happy shadows you’ll see. In particular, players have to look out for the “despair” and mouse (or “rattled”) status effects, two of the worst in the game to deal with. Despair renders your teammate unable to act, steadily draining SP, and rattled (which you’ll fortunately only find on a miniboss fight) takes them out of the fight completely, leaving them small and helpless. The significance of these two effects to Futaba’s personal troubles shouldn’t be lost on anyone. The puzzles and combat both complement the story in addition to being well-designed on their own.

Remember the question “are there other types of warped perspectives?” Futaba is a unique case among Palace owners because, at least to some, the only person she’s hurting is herself. You could make the case that her mental state hurts Sojiro, who loves her and wants to see her recover – but it’s more nebulous than an abusive teacher or boss. Persona 5 posits this: extreme self loathing is another form of distorted worldview. Futaba’s palace, borne of the belief that she’d be better off dead, is at odds with reality. 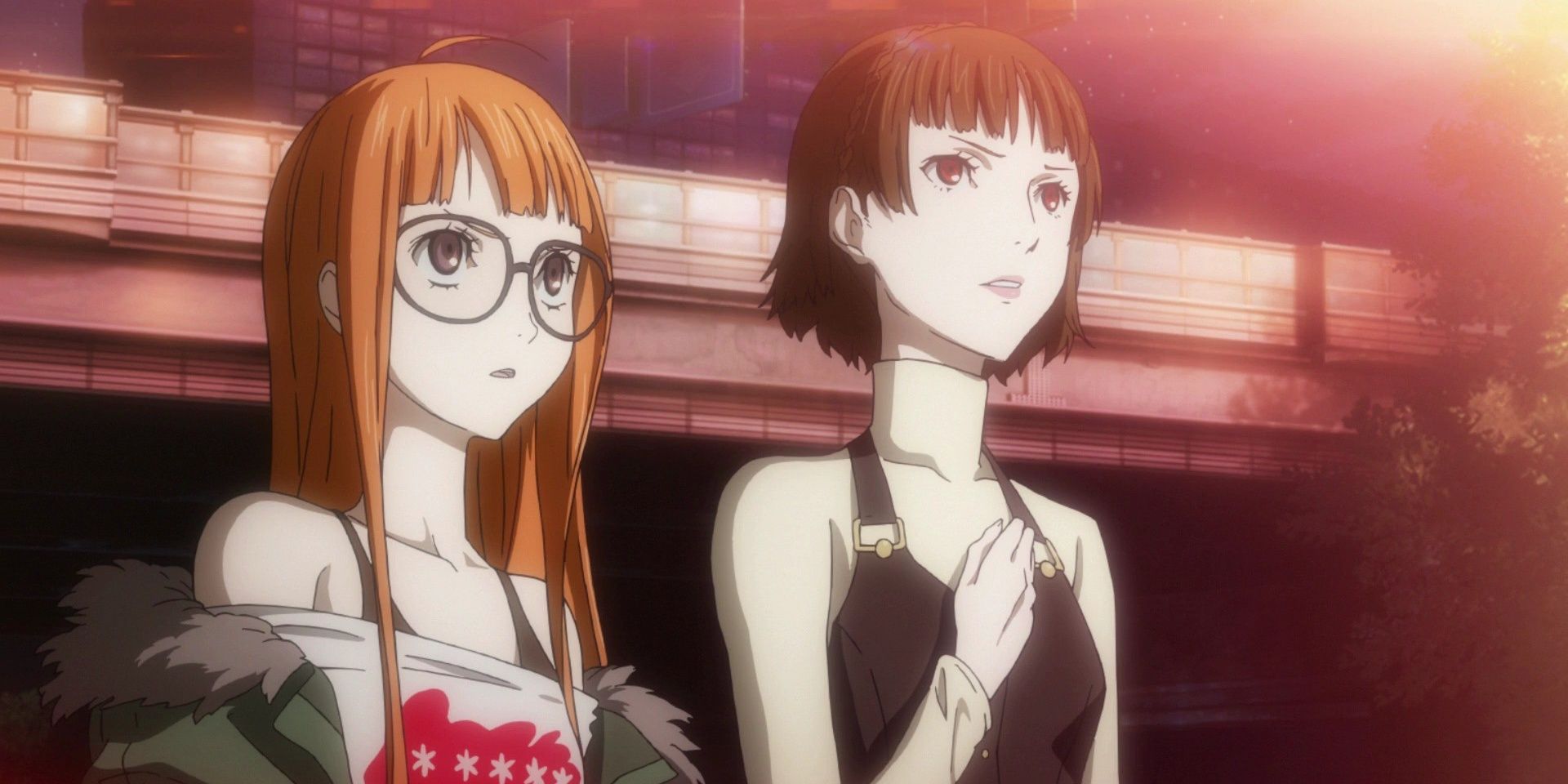 In addition to the gut-wrenching narrative of Futaba overcoming her despair, players learn of a plot in which information about the cognitive world was stolen – and murder via mental shutdown was used to get it. The value of this Palace is threefold: it advances the story with a gritty plot hook, serves as one of the best written emotional beats of the game, and introduces the next teammate while fleshing out an older Confidant.

Every element of this Palace connects to itself, from the setting, to the combat, to the core narrative of the entire game. As a level widely praised for its soundtrack and the relative balance of difficulty, Futaba’s Palace is also crucial to understanding the true goal of the Phantom Thieves. The societal change they fight for is as much about helping those who need help as it is punishing those who take advantage of others.