I’m sitting in my boxer shorts with a cold can of beer. I’ve just booted up Persona 5 Royal for what feels like the first time in years, although it’s only been a few months. Six, to be precise, so about half a year — it’s almost as if Lavenza remembers.

I know that’s painfully clichéd — months feel like years, who said that! — but I couldn’t help myself. A lot has happened in the last six months, and not very much of it has been good. The daily news cycle is oppressively disheartening, and the goalposts keep getting moved no matter how hard we try for just one inconsequential but oh would it be consequential win. 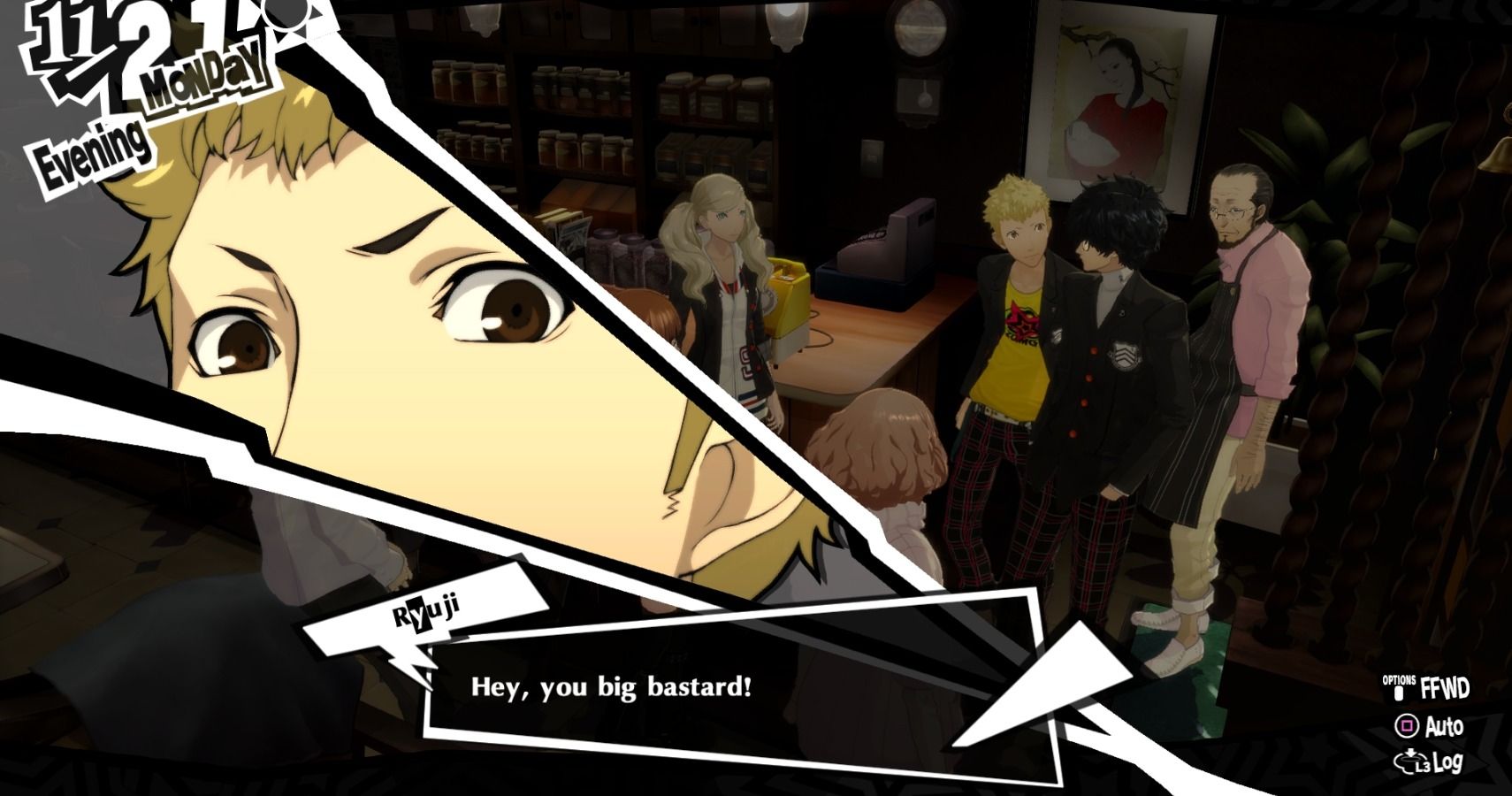 All of the above being said, I currently feel as if I’ve been transported back to a more comfortable time. The pandemic was already in full swing when I jumped into Persona 5 Royal back in April, but for a while I felt safe in my insular little bubble, teeming with all kinds of mythological creatures and ridiculous class tests. I am still convinced that the teachers in Persona 5 designed the high school curriculum after one — or eight — too many glasses of vino.

This is what I did for the month of April: I woke up. I wrote some. I read some. And then I cracked open a cold one and gave Ryuji a call. For hours on end, I would flit between Shujin Academy and the Metaverse, sharpening a pencil for every nefarious corporatocratic pissmonger I ticked off my shitlist. That sentence, I think, clarifies the reason behind why Persona 5 Royal has defined 2020 for me, or, perhaps more accurately, enabled me to find definition in a year so utterly bollocksed as this one. It captures mundanity so accurately that it’s almost as if the boredom of real-life — especially during a literal pandemic — becomes interwoven with Persona’s spin on soul-rending monotony, which then accentuates the extraordinary aspects of its stupidly sublime Metaverse (yes, it is stupid, because the cat is both a car and a helicopter). 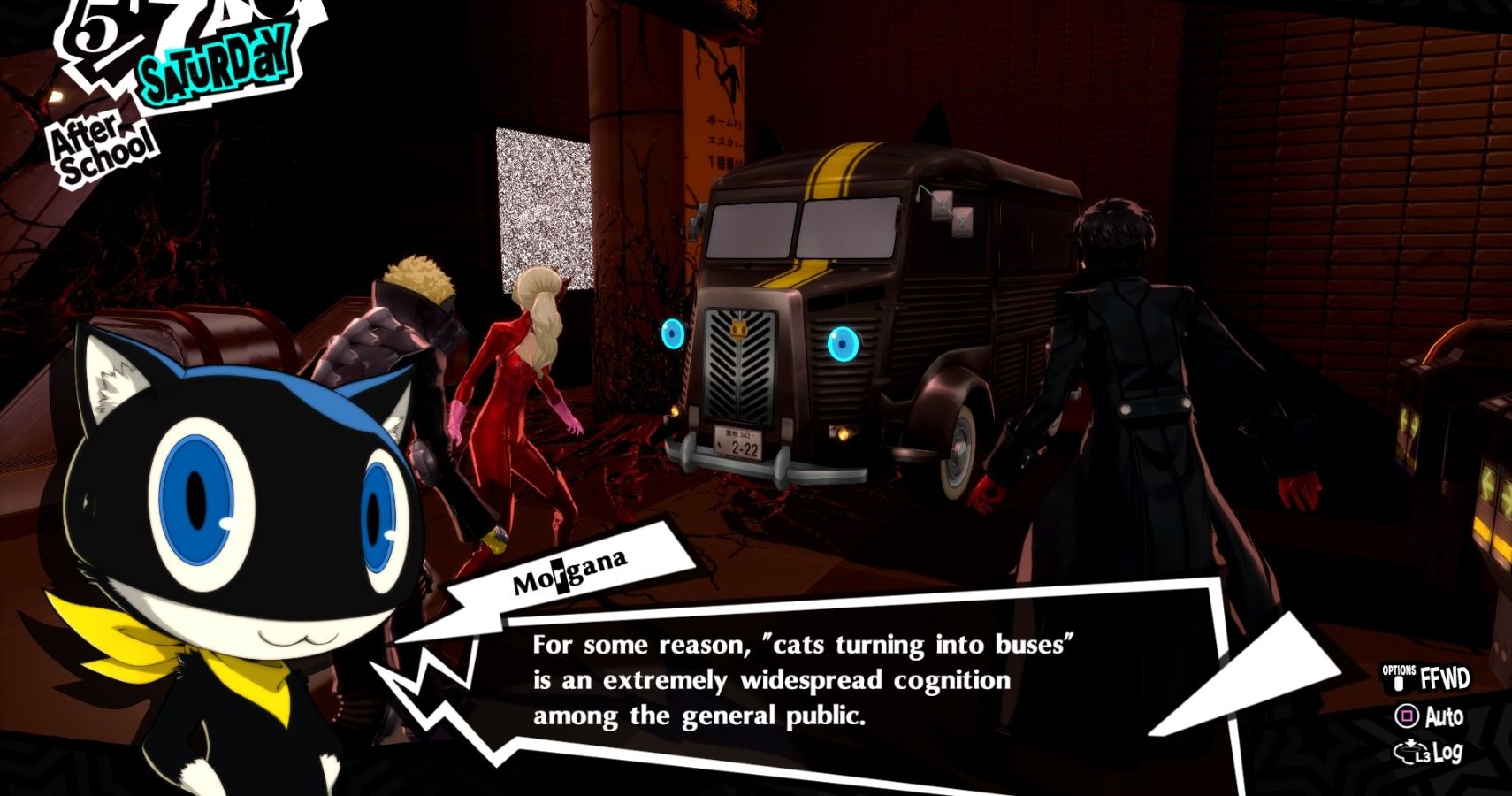 It’s a kind of contextual verisimilitude I haven’t encountered before. I know that Persona 5 is ostensibly a life sim already — you go to school, work part-time jobs, hang out with friends, and so on. That’s great!

But what happens when you can’t go to school anymore? When the supermarket you usually work weekends at shuts down? When your Wednesday drinks with pals shift venue from the local pub to fucking Zoom? I never thought I’d say going to the hospital-stenched school library to study for my maths exam would be a luxury, but in Persona 5 Royal, in the year of our lord 2020, it is a luxury by definition. Back in April I would have swapped my best shoes for five minutes in a hospital-stenched library like that one.

This is obviously compounded with the inevitable doom and gloom that has so pervasively infested social media over the last six months. It is so easy to feel powerless and redundant right now, and so immensely difficult to shift the Big Sad when those feelings take root. Agency, in some ways, seems like a relic of the past. So being able to say, “Hey Sojiro — I’m not helping you clean up unless there’s a Confidant point in it for me” made me inadvertently beam. 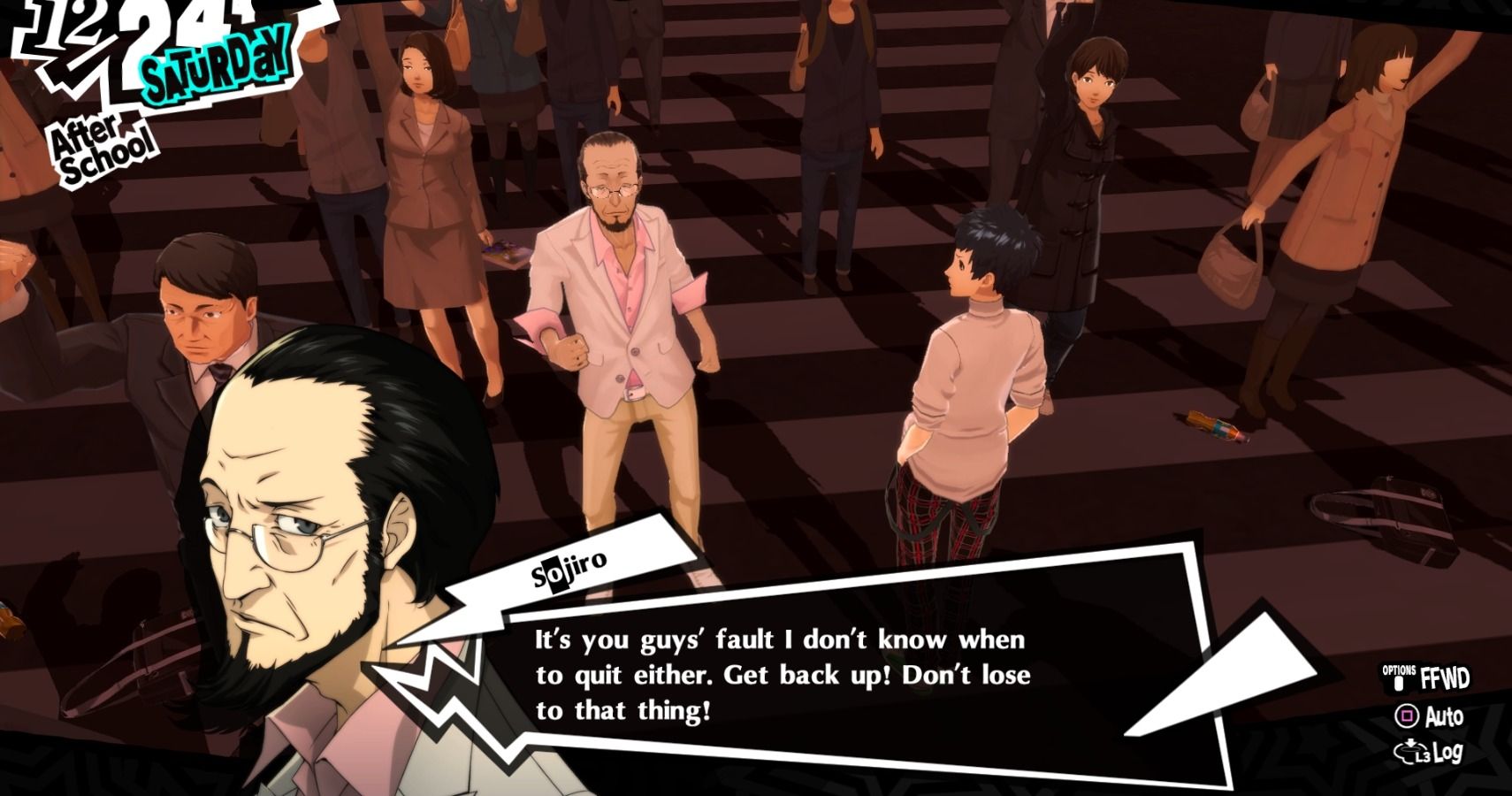 The thing about Persona 5 Royal is that, unbeknownst to itself, it launched at a time where these small exercises in individual agency amid the monotony of simply being alive were enough to make a person feel emphatically that: alive. Social interaction, personal responsibility, the simple but oh-so-coveted premise of needing and being able to switch train lines to arrive at a boring destination to do something completely and unequivocally pointless. These are everyday phenomena that we miss, and these are everyday phenomena that are an integral part of Persona — but the best bit is that they’re not the only part.

Persona 5 Royal is so accidentally engrossing at this period in time that its premise works a million times better than it otherwise would. Put it this way: Persona 5 came out in 2017. I played it a year later and really enjoyed it. I wasn’t totally sold on getting Royal at launch, but hey. Covid. And so I bought Royal, thinking it would help me alleviate at least a small amount of the festering boredom that comes from staring at the same four walls for far too long.

This is what made it so engaging. Royal’s replication of real life pretty much became real life for me — I still had drinks with friends on Zoom, and I often chatted with one or two mates in a PS4 party while I played. At the same time, I woke up every morning and got excited for Royal the same way I would have been excited to go to a restaurant before, or a bar, or a friend’s house. It became my daily routine — not just to play Royal, but to adhere to routine within it. And here’s the ace in the hole: I had agency to actually overcome Royal’s Big Bad, so my almost over-investment in it drastically accentuated the catharsis I’d usually have felt from beating a game. This time last year I’d probably think it was pretty fun to attack and dethrone God, but because of the way I had been playing Royal — by necessity, mind, because even if I tried this in normal circumstances I would never be able to become so engaged — I genuinely felt fucking fantastic when I summoned Satanael. 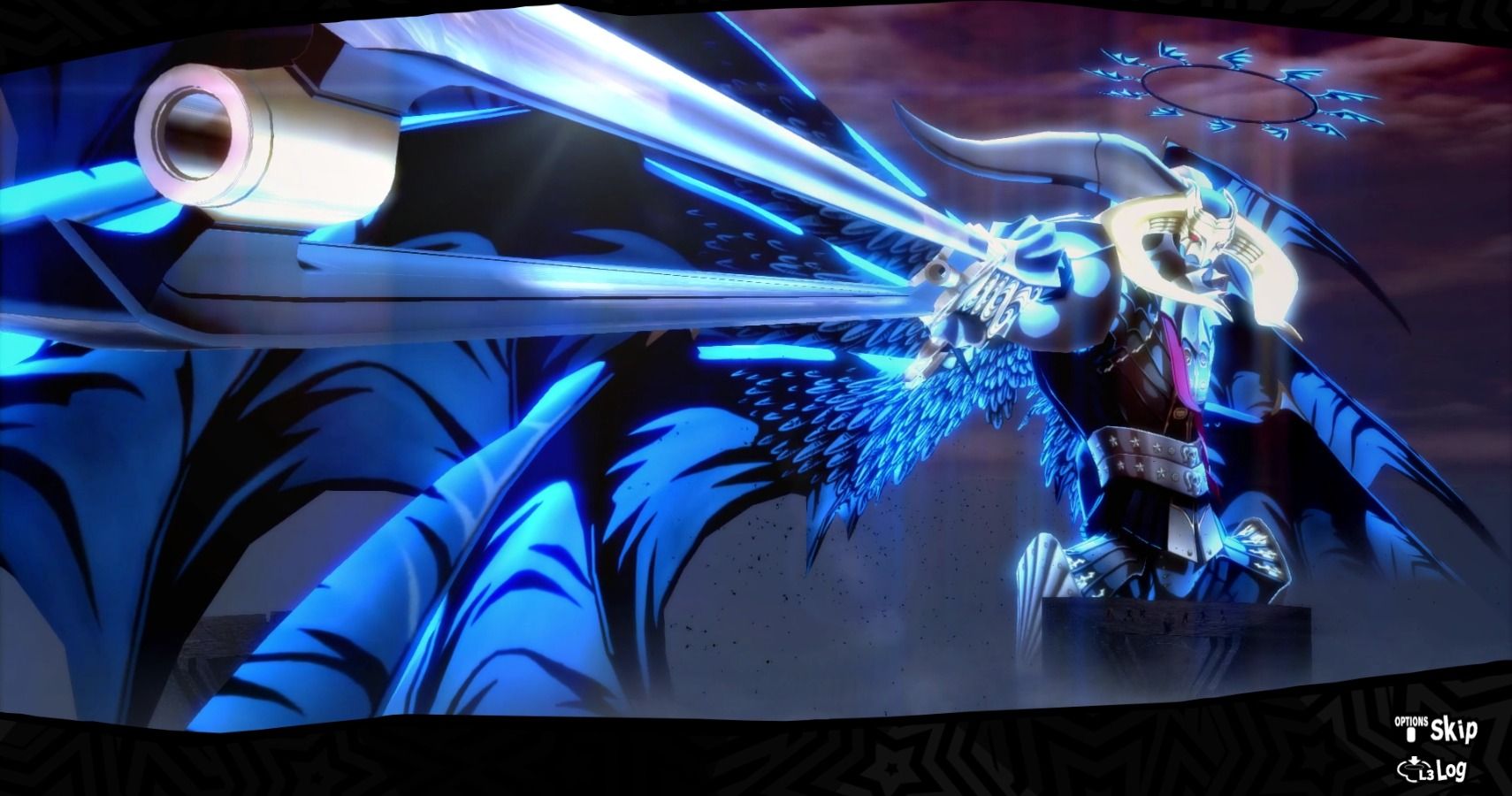 And so the Big Bad outside the four previously boring walls I couldn’t stand looking at was completely obliterated by the Big Bad I… well, was actually able to obliterate. On top of that, the agency of being able to study for ultimately pointless in-game exams when I couldn’t even open my real-life front door meant that beating up the idiot known as God hit home with the force of a thousand earthquakes, a million tidal waves, an infinite number of cosmic eruptions that swallowed up the universe itself. I’m not exaggerating, because I don’t know what any of those things feel like. Maybe I’m right.

“This is truly an unjust game, your chances of winning are almost none,” Lavenza says at the beginning of Persona 5 Royal. “I beg you. Please overcome this game… and save the world…”

That’s the kicker, isn’t it. It is a truly unjust game. Life, I mean. This year. But the ability to overcome seemingly insurmountable odds in a video game that juxtaposes the most unbearably ordinary parts of everyday life with a supernatural world where you can actually have a tangible and important impact on injustice kind of sticks a temporary band-aid on that. 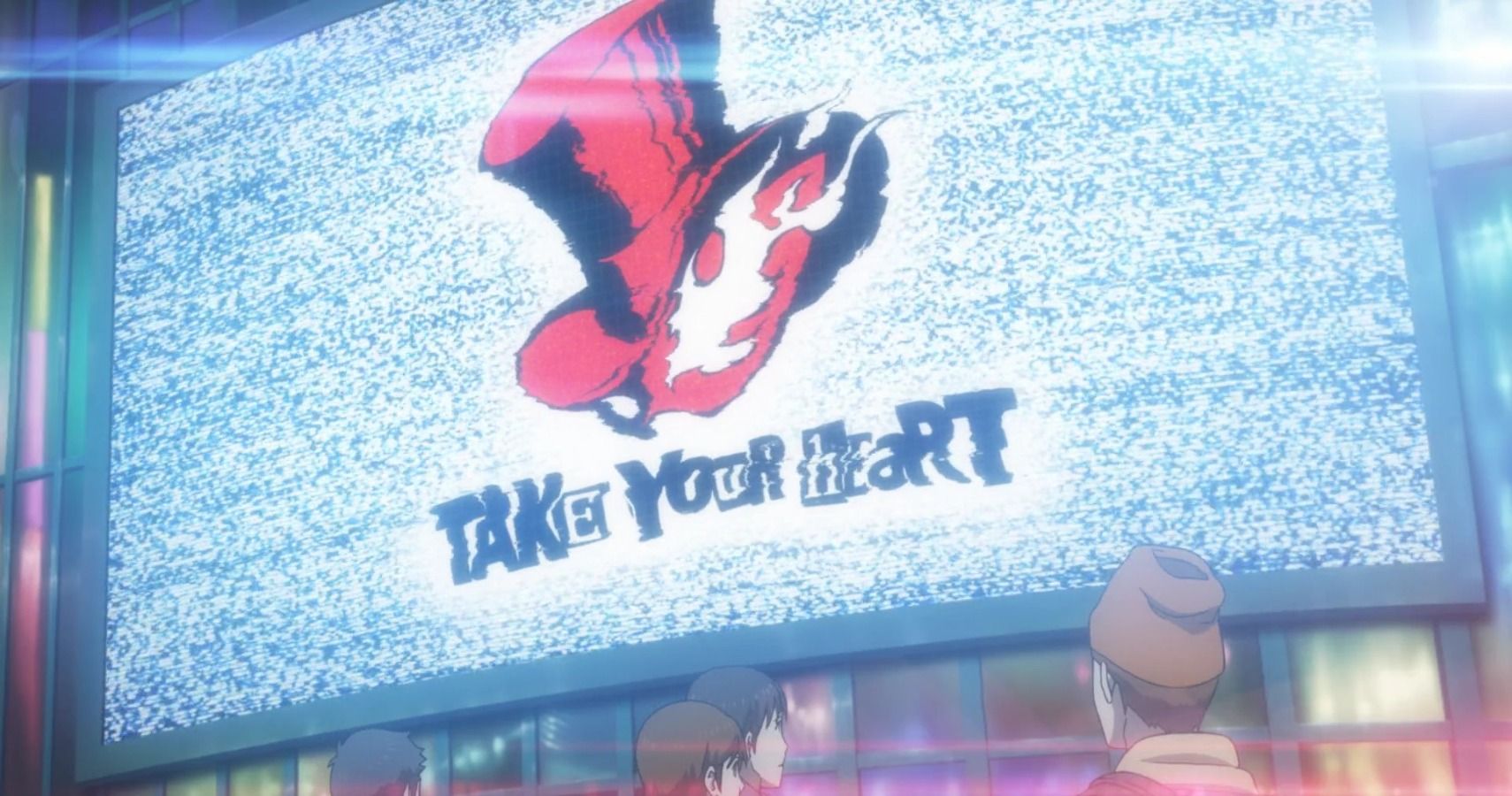 I haven’t got to the first Palace yet, so I’ve not bumped into Ryuji again, let alone Yusuke, Makoto, and the rest of the crew. But I’m excited to go people-watching with Yusuke in Shibuya. I’m excited to hang out in a jazz club with Akechi. I’m excited to get annoyed at Morgana for being an irritating little shit and running away with Haru because he’s salty about Futaba being smarter than he is. Most of all, though, I’m excited about doing all of the countless other things I can’t do right now and, at the end, clocking God in the head with a bullet made of the seven deadly sins. Talk about agency!

I’ve thought I enjoyed other games more than Persona 5 Royal since I played it. Indies like Hades and Horizon’s Gate. Stories like The Last of Us Part 2. And yet, for some reason, there was this lingering sense of needing to go back to it, urging me to reinstall a 100+ hour RPG in the middle of Big Games Season when I should probably be trying to keep up with what’s relevant right now.

As soon as I booted it up — as soon as that first note of Life Will Change in [Redacted]’s Palace kicked in… It was obvious then. Persona 5 Royal is my Game of the Year because of the year in which I played it. It is defined by, and defines, the better parts of my 2020. And I reckon I’d be stupid not to try and squeeze a third run in before Christmas, because this is the one game that’s been able to make 2020 a bit more bearable for me.

Read next: Naoki Yoshida Says He Would Love To Do A Final Fantasy 14 Crossover With Diablo Or World Of Warcraft 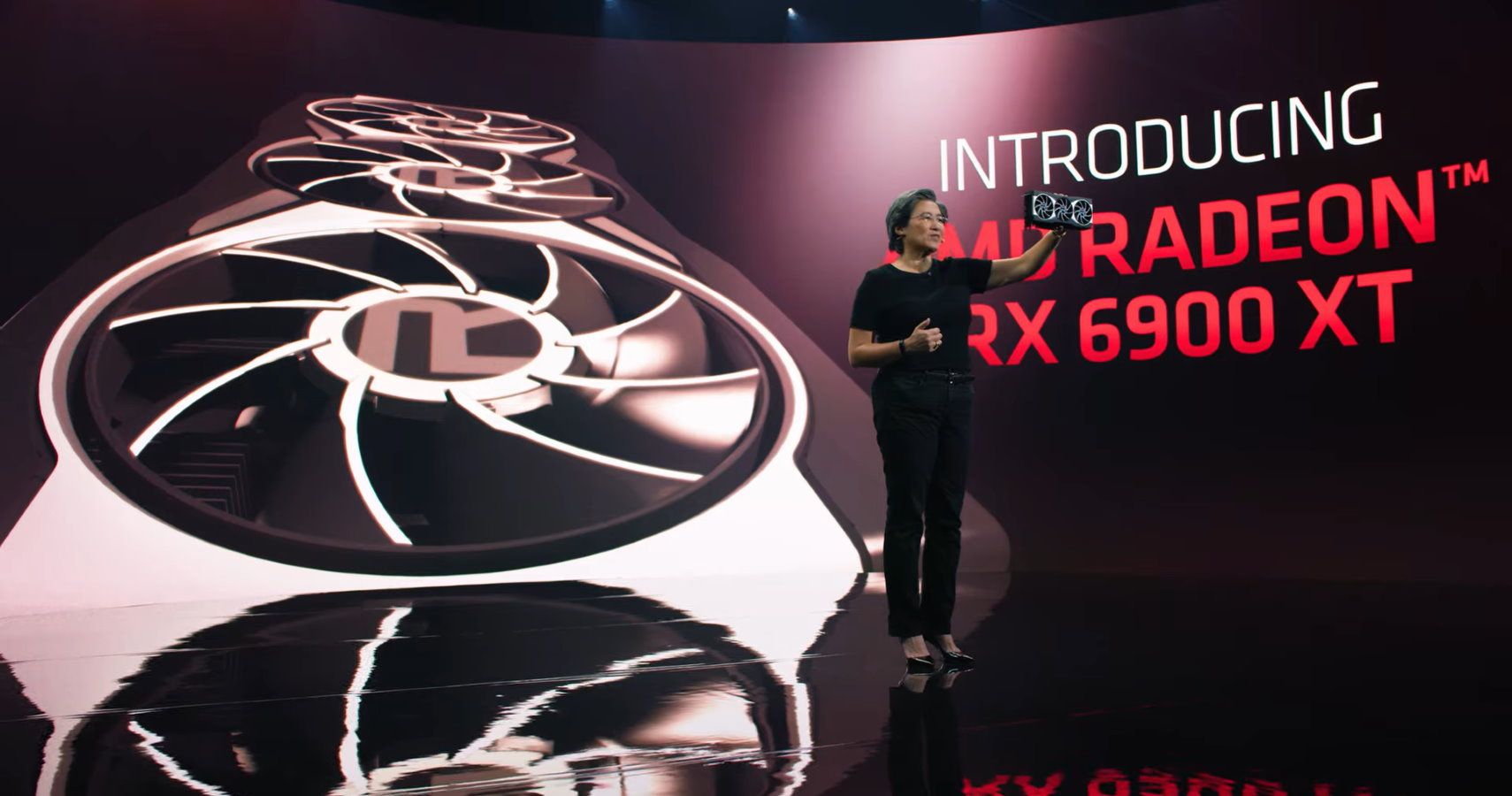