Classic British sci-fi comic 2000 AD turns 45 years old this year. You've almost certainly heard of future cop Judge Dredd, its flagship character, but unless you're a regular reader you're probably less familiar with a more recent addition to the roster. Proteus Vex was created by veteran Dredd writer Michael Carroll, first appearing in 2000 AD in 2019, and he's the titular star of one of the most exciting stories I've read in a comic in years.

Proteus Vex is a weird, wildly imaginative space opera inspired by Carroll's love of pulpy sci-fi stories by authors like Edgar Rice Burroughs, C.L. Moore, and Ray Bradbury. It's sci-fi where the fiction always takes priority over the science, with an offbeat, surreal approach to the genre that borders on the psychedelic. The art and world-building are magnificent too, reminiscent of the idiosyncratic sci-fi worlds drawn by Jean 'Moebius' Giraud.

Set after a devastating 1,400-year intergalactic war, Vex is an agent for the winners of the conflict, the Imperium Ascendent—until he discovers a dark secret. He learns that the Imperium secured its victory by sacrificing billions of innocent lives, teleporting a dying star into the enemy's home system and wiping it out. Vex makes it his mission to expose the Imperium's war crimes and becomes the most wanted man in the universe as a result.

Adding an extra layer of strangeness to Proteus Vex is the fact its protagonist has a symbiotic relationship with a so-called flesh pilot. These tiny humanoid creatures live inside people, heightening their instincts, blocking pain, and sharing memories from previous hosts. The Imperium is offering bounties for their capture, claiming these mysterious beings have sinister motives—but really they're just scared of what their latent memories might reveal.

Like I said: it's weird, which makes for a highly enjoyable—and completely unpredictable—read. The latest Proteus Vex story, Desire Paths, is currently running in 2000 AD. Vex is still being pursued across the galaxy, and encounters a group of gross, eyeless, thumb-headed bounty hunters called the Gexemedan Clan. They're the guys in the image at the top of the article: a fine example of the bizarre alien designs featured in this series. 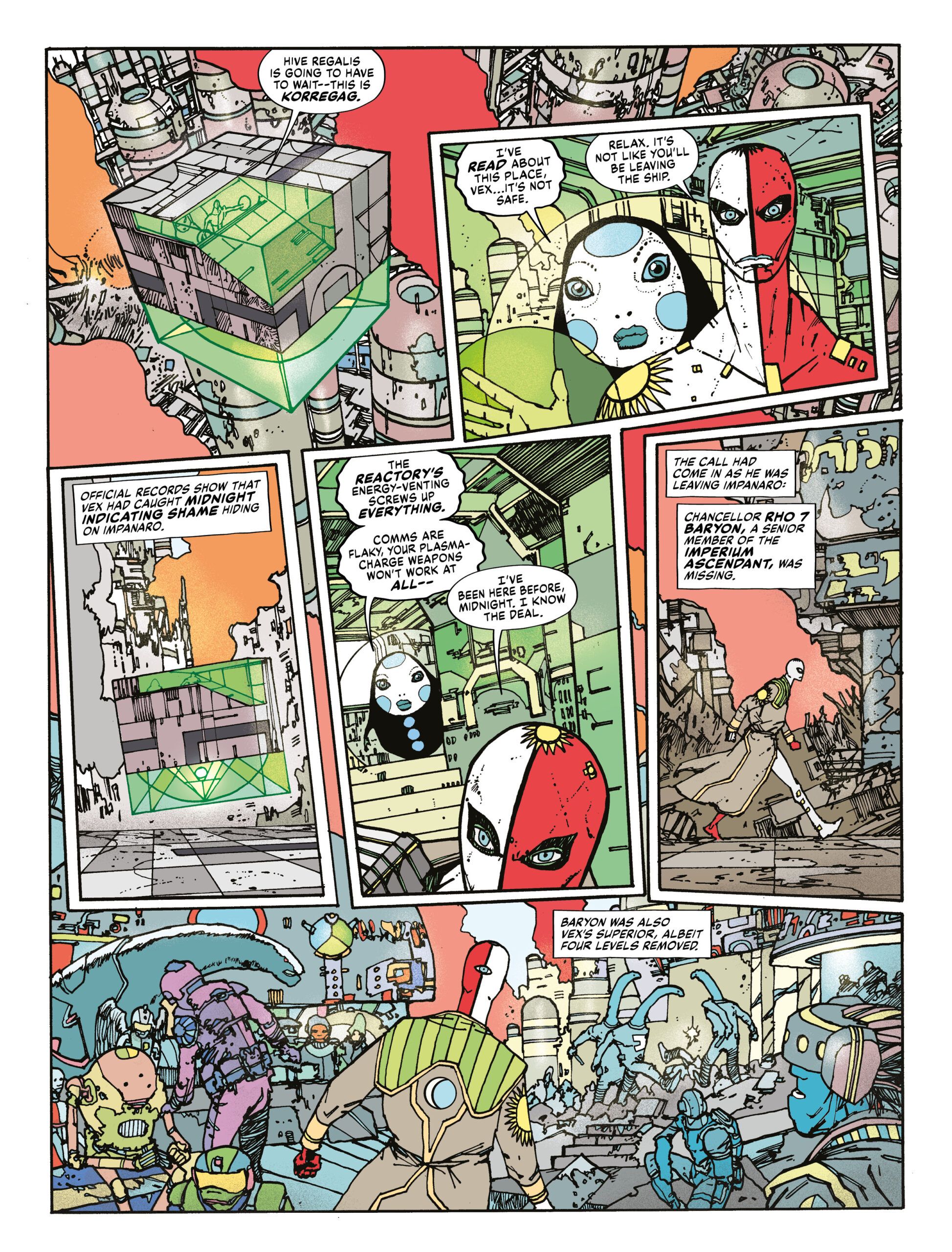 The Gexemedan Clan are all clones of a criminal who thought creating copies of himself would make it harder for the authorities to pin a crime on him. But he didn't count on the clones going rogue, killing him, and forming their own gang. That's just a small taste of the kind of imaginative, outlandish sci-fi you'll find in any given Proteus Vex story. As you turn the pages you never know what fresh weirdness Carroll is going to throw at you next.

There are big moments in Proteus Vex, with explosive space battles and flashbacks to the war. But it's just as good at smaller, more intimate character stuff too. The first part of Desire Paths is entirely dialogue-driven, set in a single location, and it's incredibly evocative. It's also one of the most alien sci-fi worlds I've ever seen, with artists Jake Lynch and Henry Flint dreaming up some amazingly strange ships, creatures, and planets.

There are a lot of great, interesting stories running in 2000 AD at the moment, but it's this one that has me looking forward to the next issue dropping into my mailbox every week. 2000 AD is positively ancient, but I love that it's still introducing characters as good as this 45 years later. If you're looking for a killer science fiction story that plays with the conventions of the genre, and is clearly having a lot of fun doing it, you'll love Proteus Vex.