“Forget everything you know about mobile games” is the repetitive slogan shouted across too many sponsored videos on YouTube.

It’s not simply a catchy marketing gimmick, but rather a cult-like chant by developer Plarium Games, where they hope that if enough people repeat the hollowed words they could fundamentally warp reality. Because let’s face it: the only way Raid: Shadow Legends could ever be mistaken for any kind of fun would be if users literally forgot everything else about mobile gaming. Raid: Shadow Legends is everything that’s wrong with the mobile game market, and we’re not afraid to shout it loud and proud. 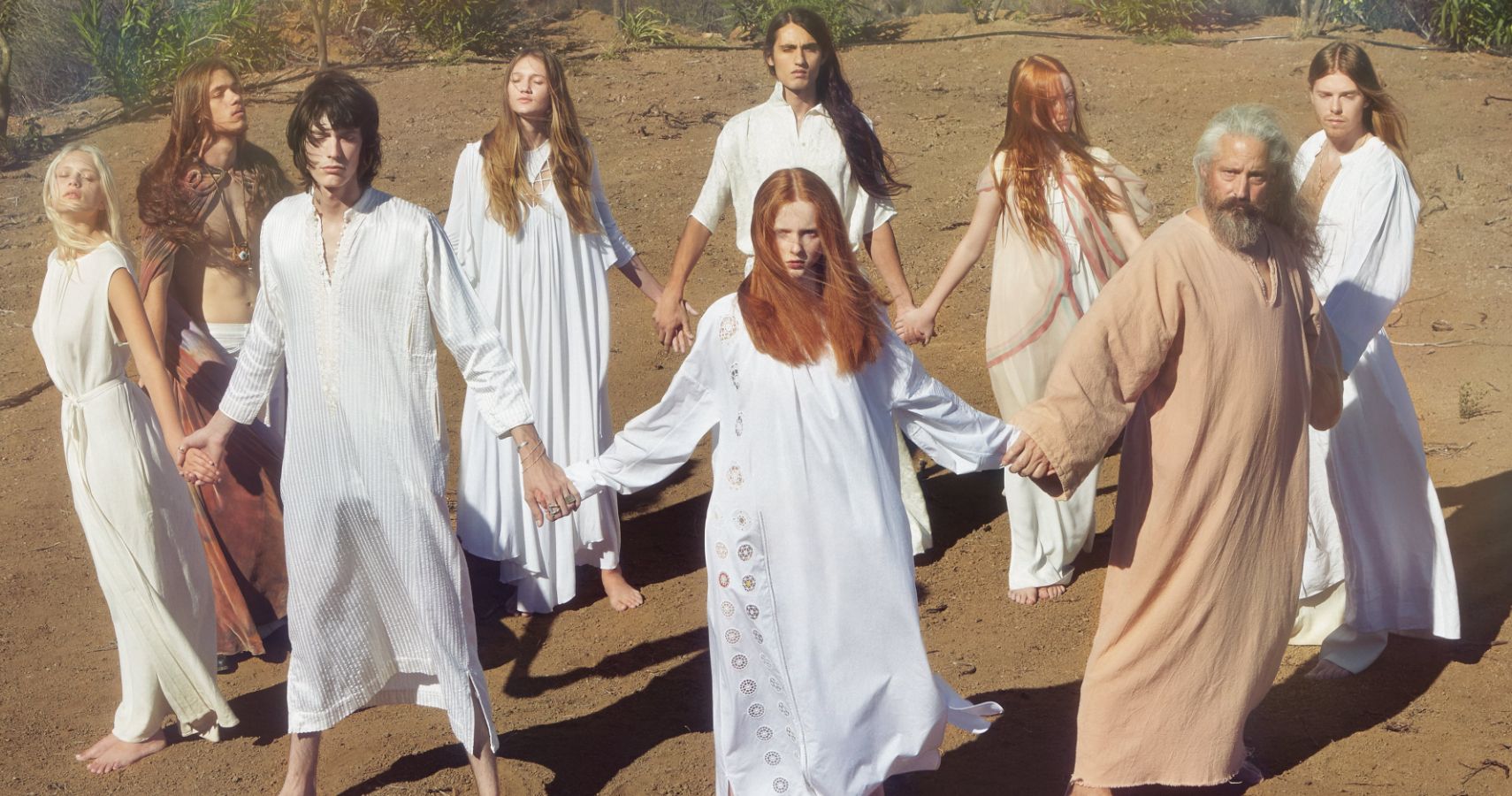 What Exactly Is Raid: Shadow Legends?

At its core, Raid: Shadow Legends is a freemium turn-based RPG with a gacha system for collecting hundreds of distinct characters. There’s a single-player mode with a predictable, mediocre story, and while its artistic presentation is overall quite nice for a mobile game, that’s the only possible praise that this game can garner.

It’s all downhill from here. 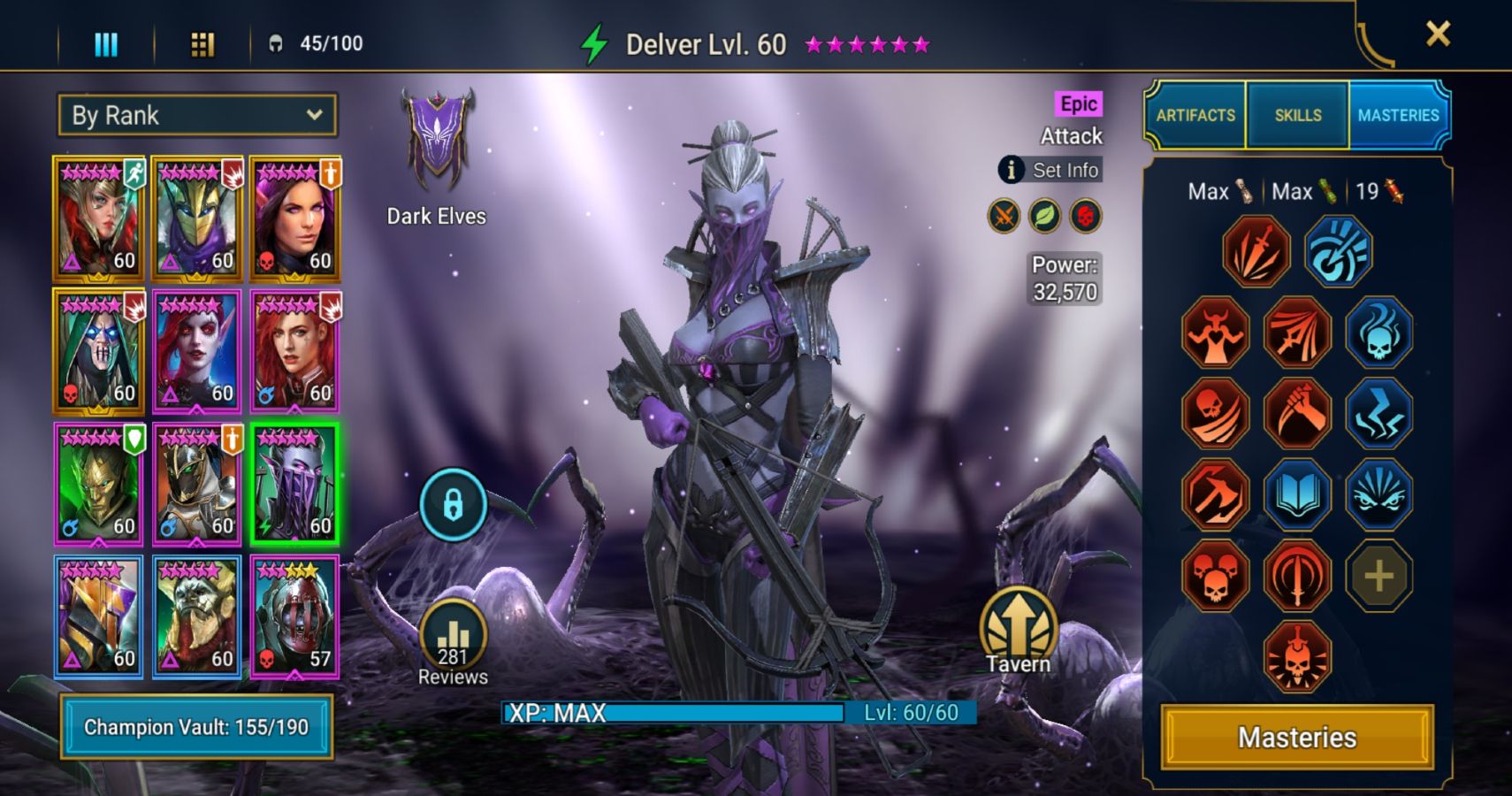 The First Hit Is Free

When first playing the game, the illusion of choice is littered across the screen. Campaign, Dungeons, Faction Wars, and other options are available in Game Modes, but each of these are incredibly shallow. Although so many of the YouTube sponsors declare the game to be ambitious and up to par with some of the most complex PC games, most of the game can be set to autoplay and set to double speed, freeing the player from actually needing to slog through the mundane, repetitive chore that is Raid: Shadow Legends. 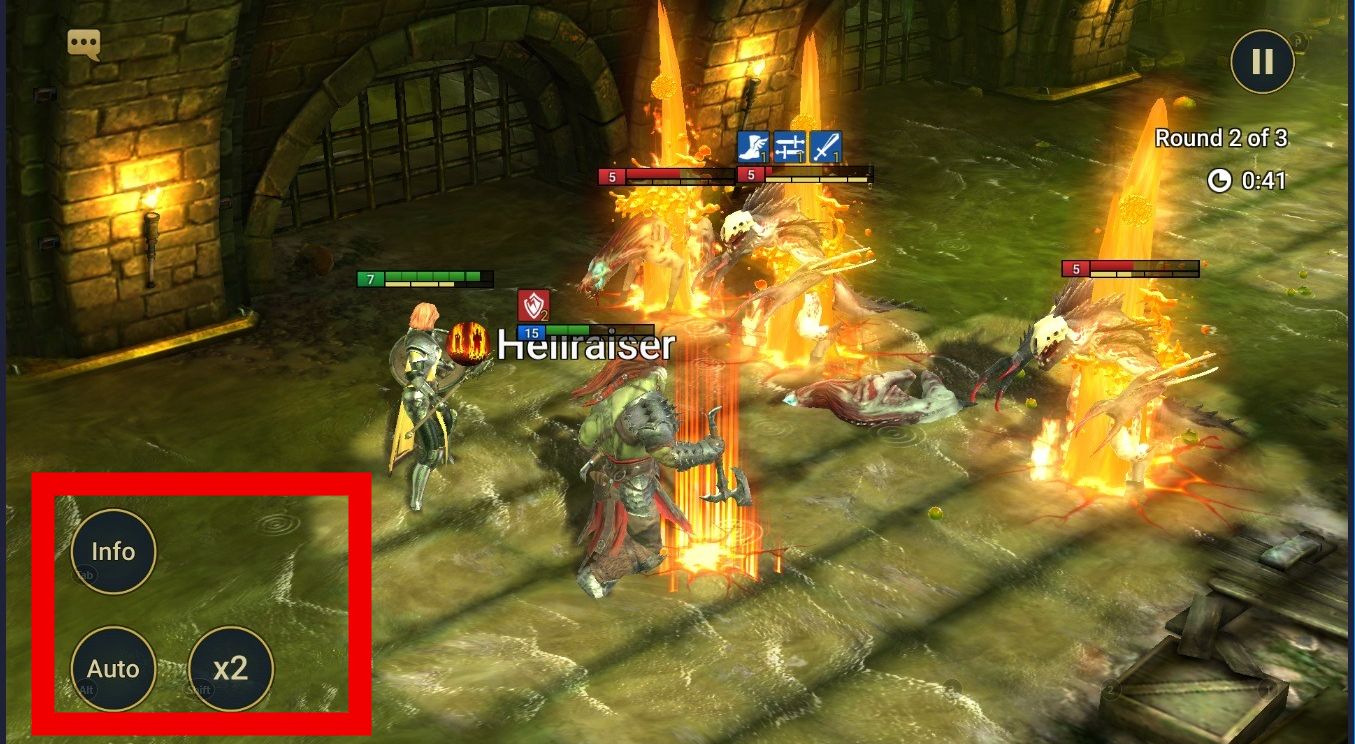 Most players will start the game with a “gift” of resources which come from the referral codes provided by whichever YouTube sponsor gave them this first free hit. With those resources a player can boost a character up to far exceed the requirements of the first few areas, making the first hours of gameplay feel easy since nothing is really a challenge.

The Epitome Of Pay To Win

At all times, Raid: Shadow Legends is pestering its players to spend real money. This is not an exaggeration, it often feels as though transitioning from virtually any screen causes a prompt to appear to purchase a Level 10 Pack, A Gem Pack, a Warrior Pack, or countless other real money purchases. At times this kicks into overdrive, and four or five prompts appear, one right after closing the one that came before. Worse still is the developer’s inclusion of a countdown timer on each of these prompts that are supposed to indicate that this is a limited time offer, as if these parasites would ever reject a player’s money. 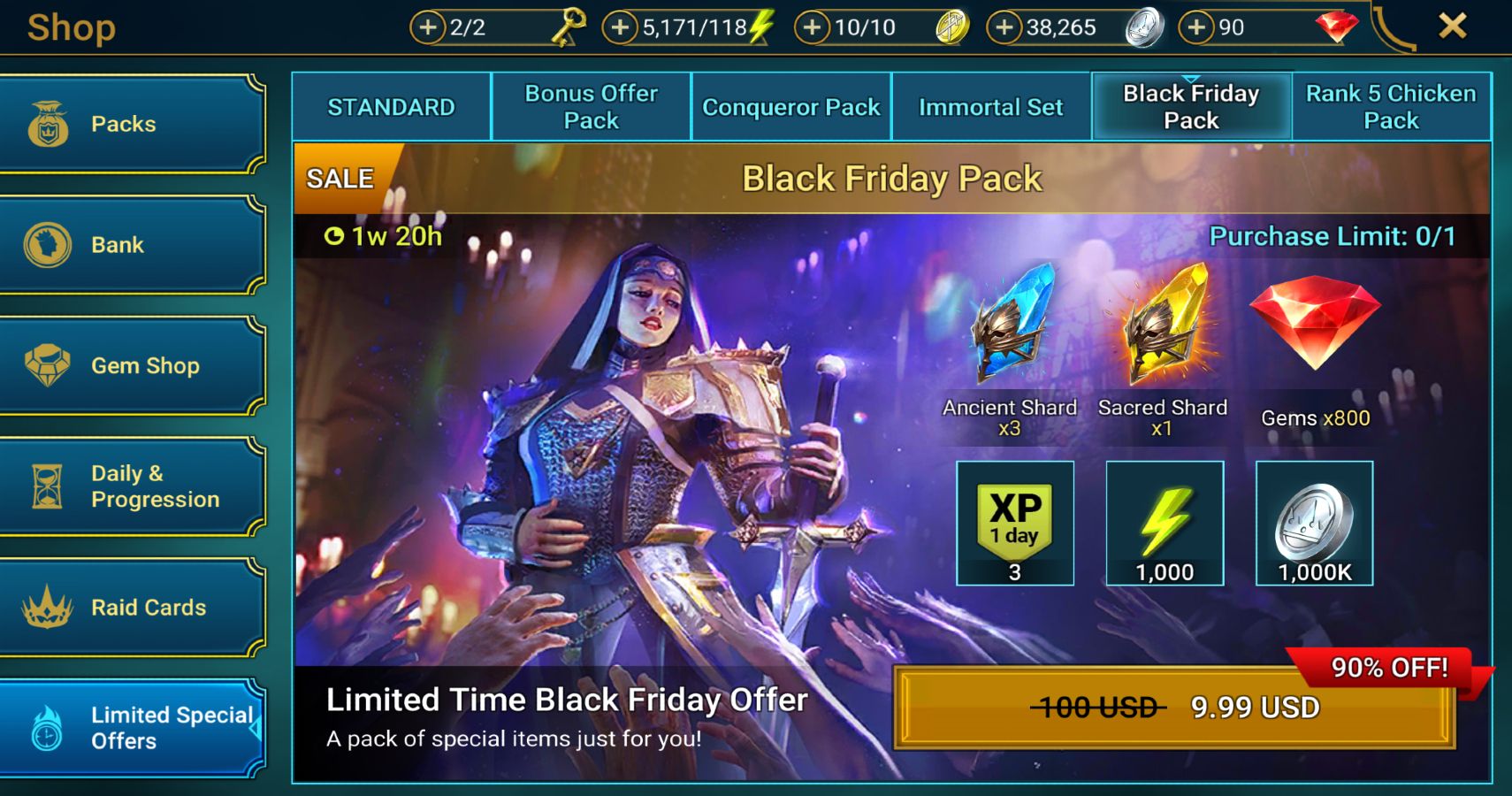 Now, we are not so naïve as to state that a mobile game developer should not monetize their game. Every business needs to generate revenue to justify their costs or soon the entire operation will fold. With that said, consumers have been subjected to the worst, most manipulative monetization methods in the video game industry over the past few years, and Raid: Shadow Legends embodies the worst characteristics of all, because these purchases directly provide a spike to the overall power level of your characters.

Are you stuck on a particularly difficult dungeon and don’t want to grind for more gear? Use your Visa! Do you need more silver to equip a new weapon, because for some reason that costs in-game currency? Break out the MasterCard! Are you dissatisfied with your rank in Arena against the teams boosted by other players and their credit cards? Then spend more money, or forever stay in the lowest ranks of “competitive” play, you filthy, poor casual

Ultimately, the problem is not that Raid: Shadow Legends hounds its users for money at every moment, it is that spending money is the only way to compete with other players. Fortnite raked in nearly $2 billion in 2019, conferring no competitive advantage to any of its players, so it’s clearly not an impossible task.

Not The First, And Not The Last 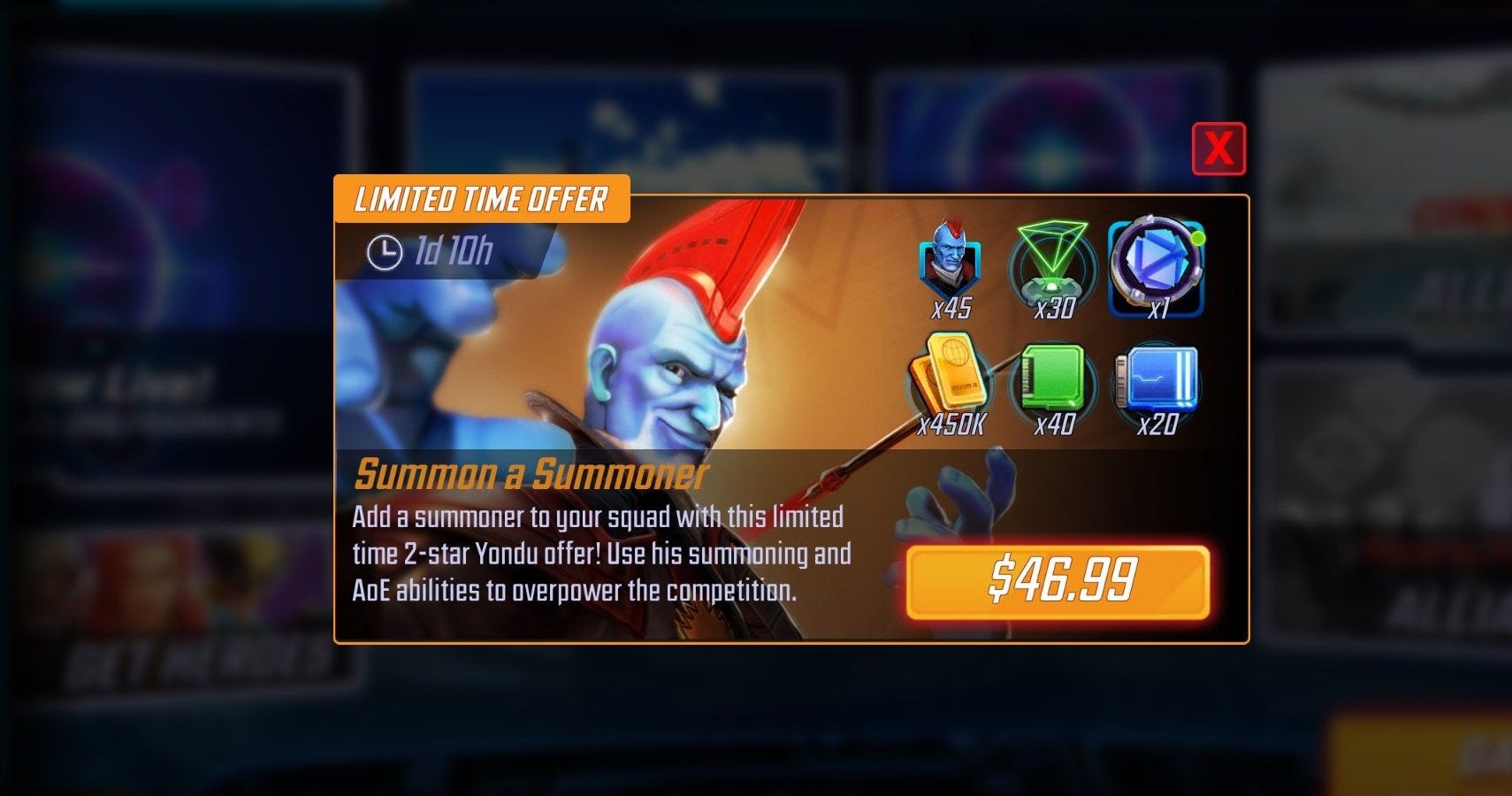 There, players are also hounded every other screen to spend ridiculous sums of money to improve their Captain America, or better gear their Yondu, all of which confer real advantages to both the Arena game mode and cooperative end-game raids. At least in that game there is some semblance of an end game, which is more than we can say for Raid: Shadow Legends, but in essence they both strive to rip as much money as possible away from their users.

The fact is that the mobile gaming market is ballooning at a rate that few expected. 2019 saw revenues for mobile gaming dwarf the individual revenue for console and PC gaming, so there is profit to be made. Ultimately, it falls to consumers to cast a critical eye on the endless propaganda that has invaded the internet, and now, our favorite YouTube content creators.

The easy route might be to point an accusatory finger at the many content creators that have taken money to promote Raid: Shadow Legends, but that’s not the correct course of action. Content creators have been learning the hard way over the past year that YouTube is not their friend, and it has become increasingly difficult to be monetized on the platform.

The reality is that anyone who takes sponsorship money to promote Raid: Shadow Legends is just trying to keep the lights on, and they always disclose that “This video is brough to you by…”, or something to that effect. In the same way that few, if any of your favorite podcasters actually use Hello Fresh, MeUndies, or Squarespace, odds are that none of these YouTubers are genuinely excited to play this travesty of a game. Like Dave Chappelle says, his favorite thing happens to always be whoever paid him most recently. What a coincidence.

At the end of the day, there is always someone trying to make the consumer part ways with their hard earned money, and with interned adds and sponsorship around every virtual corner, we as consumers need to squint hard and see what really lies beneath that glossy coat of paint.

Raid: Shadow Legends is absolute trash in every sense of the word, but no one should be surprised after taking even a cursory glance.