A recent analysis of esports trades over the past ten years worldwide provides insight into how certain trades and behaviors have helped take teams to heights unseen with profit and dominance over all others. As esports continue to skyrocket in growth, the importance of trades and how they are executed is sure to become a major focus in the coming years.

It is no exaggeration to say that esports are on the rise. In 1998 the total esports prize pool money across 536 tournaments totaled $7.8 million, while in 2018 that amount was $155.9 million, and professional gaming is estimated to reach revenue streams of $1.8 billion by 2022. 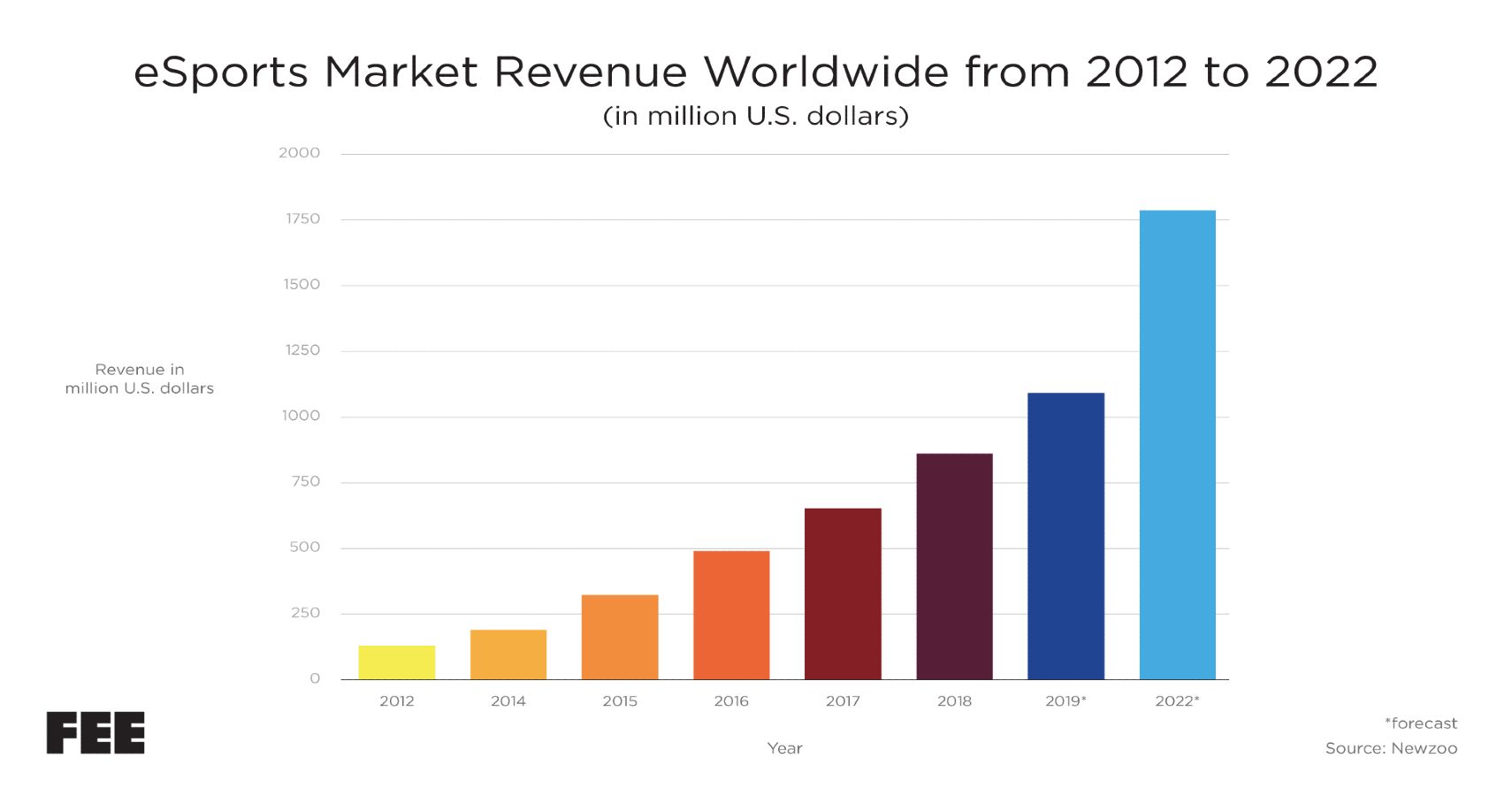 By examining esports player transfer data from 2009 to 2019 on esportsearnings.com, it is possible to see both the individual monetary impact of certain high-performing players as well as the frequency of transfers in that time.

Overall, there has been a 400% increase in esports player transfers during this ten-year window, peaking in 2016 and slowly descending. Throughout that time, the top five countries that trade esports players are the U.S.A (3,308), South Korea (2,549), China (1,252), Germany (915), and Sweden (907). While the U.S.A. leads in trades, it should be noted that half of all esports teams around the world have completed fewer than ten transfers in the last decade. 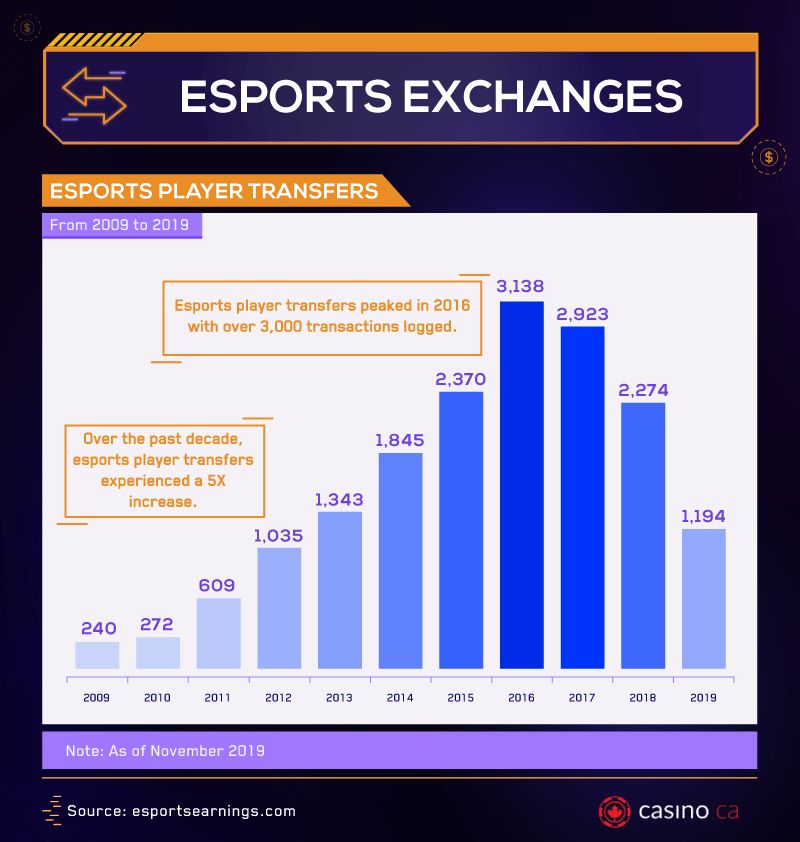 Meanwhile, some teams trade constantly since 2009, as seen with Fnatic (226), mouseports (221), and Millennium (214). While the volume is high, more trades does not necessarily equate to better performance or higher overall earnings for an organization. As seen in the image below, Team Liquid and Evil Geniuses both out-earned these other organizations with fewer transfers, though still being high in overall volume of trades. 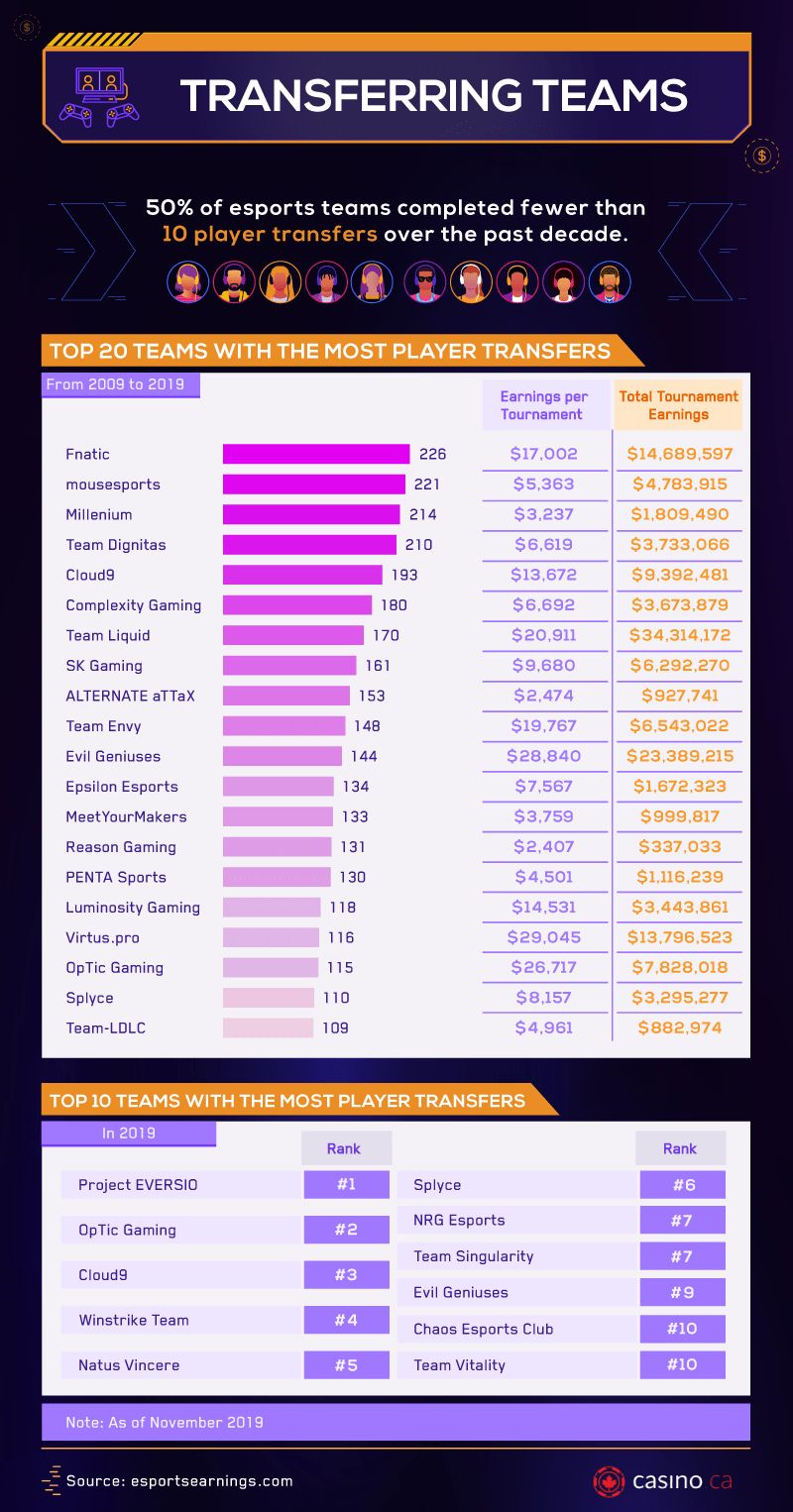 High-Performing Players Earn The Most

While volume may serve to partially indicate success for an organization, individual key trades appear to make major impacts on an organization’s performance and earnings, and these are the ones to watch out for. In 2017, Fnatic acquired Jesper “JW” Wecksell with an impressive team earnings of $809,802 in CS:GO.

While those earnings are impressive on their own, further analysis reveals that that the most important individual trades are for the most elite players of the highest paying esports. Such a statement sounds obvious, and the data in the image below shows clearly that the highest individual earners are all competing in the games with the largest prize pools among all esports, namely League of Legends and Dota 2.

A quick note on this is that while Kyle “Bugha” Giersdorf is listed as the highest overall earner for Fortnite, 98% of his yearly earnings were made from a single event in winning the 2019 Fortnite World Cup. 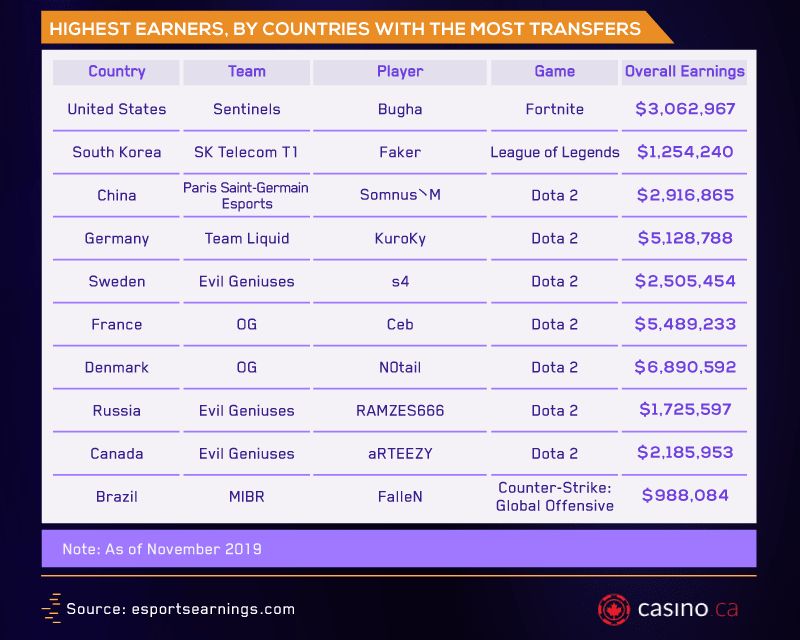 As esports continue to grow over the next decade, the way in which trades are calculated will also continue to develop as teams search for the optimal way to build their lineups. From the perspective of a fan, it can be easy to associate a player with a team, especially if they have been with an organization for a while and have grown in skill — seeing them traded away often feels personal.

However, like traditional sports, trading players is a cold, dispassionate, calculated process that aims to cut the fat from an organization and take on only what can help improve overall performance. Apart from the occasional personality conflict that makes the melding of certain players all but impossible, teams trade in order to optimize their performance, and this type of targeted trading is only the start, as esports is likely in its relative infancy compared to traditional sports. 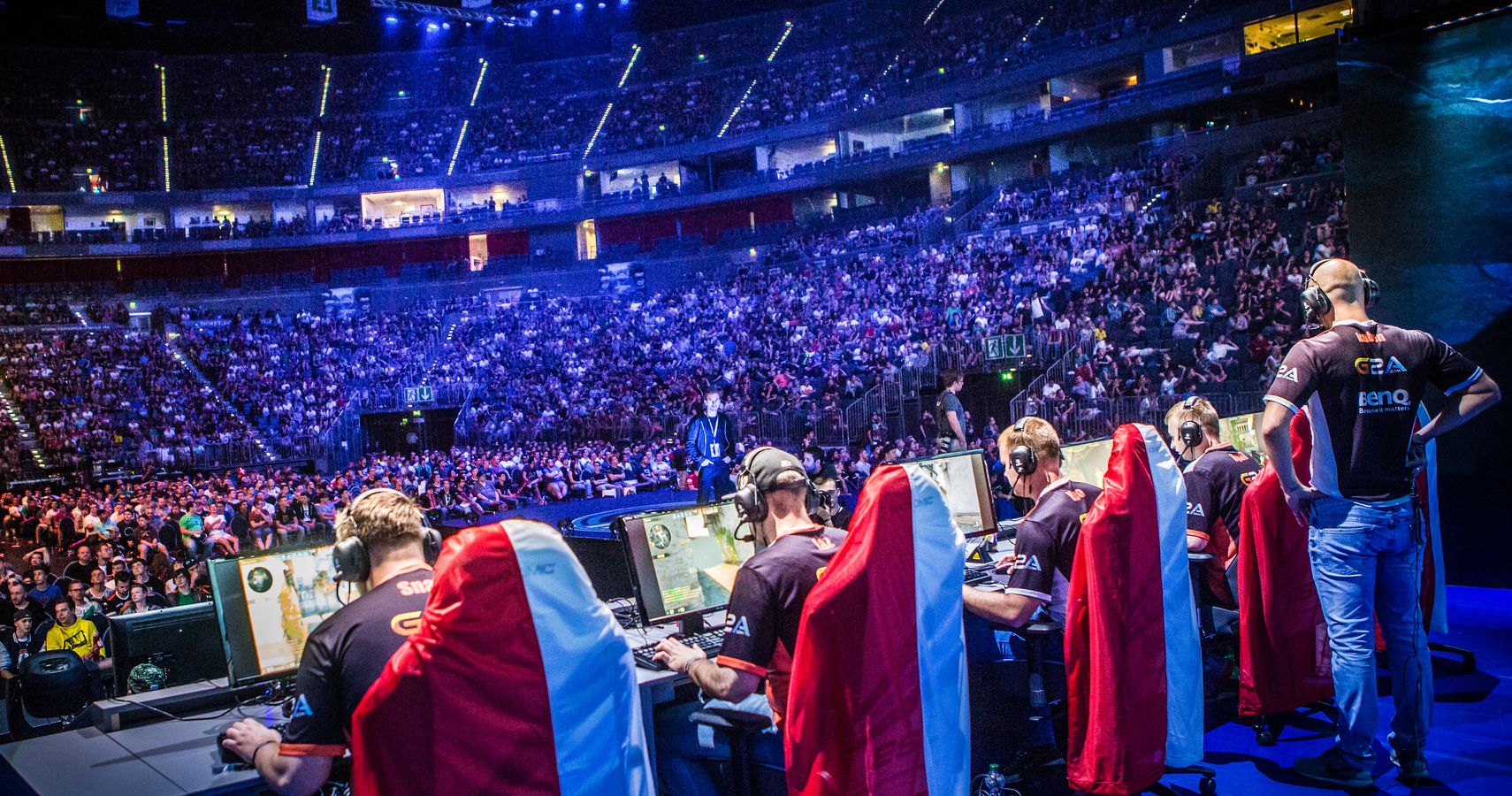 Rather than attempt to dive in here to the economics and statistical processes of determining individual player value for an esports trade, this writer recommends watching Moneyball, a movie about the evolution of baseball through economic and statistical theory disguised as a sports flick. How does one create the perfect team?

One option is to throw immense amounts of money at so-called “Star Players,” while the other is seeking out value where others cannot even register its presence. There is even a surprise, uncredited cameo from Bobby Kotick, CEO of Blizzard Entertainment. 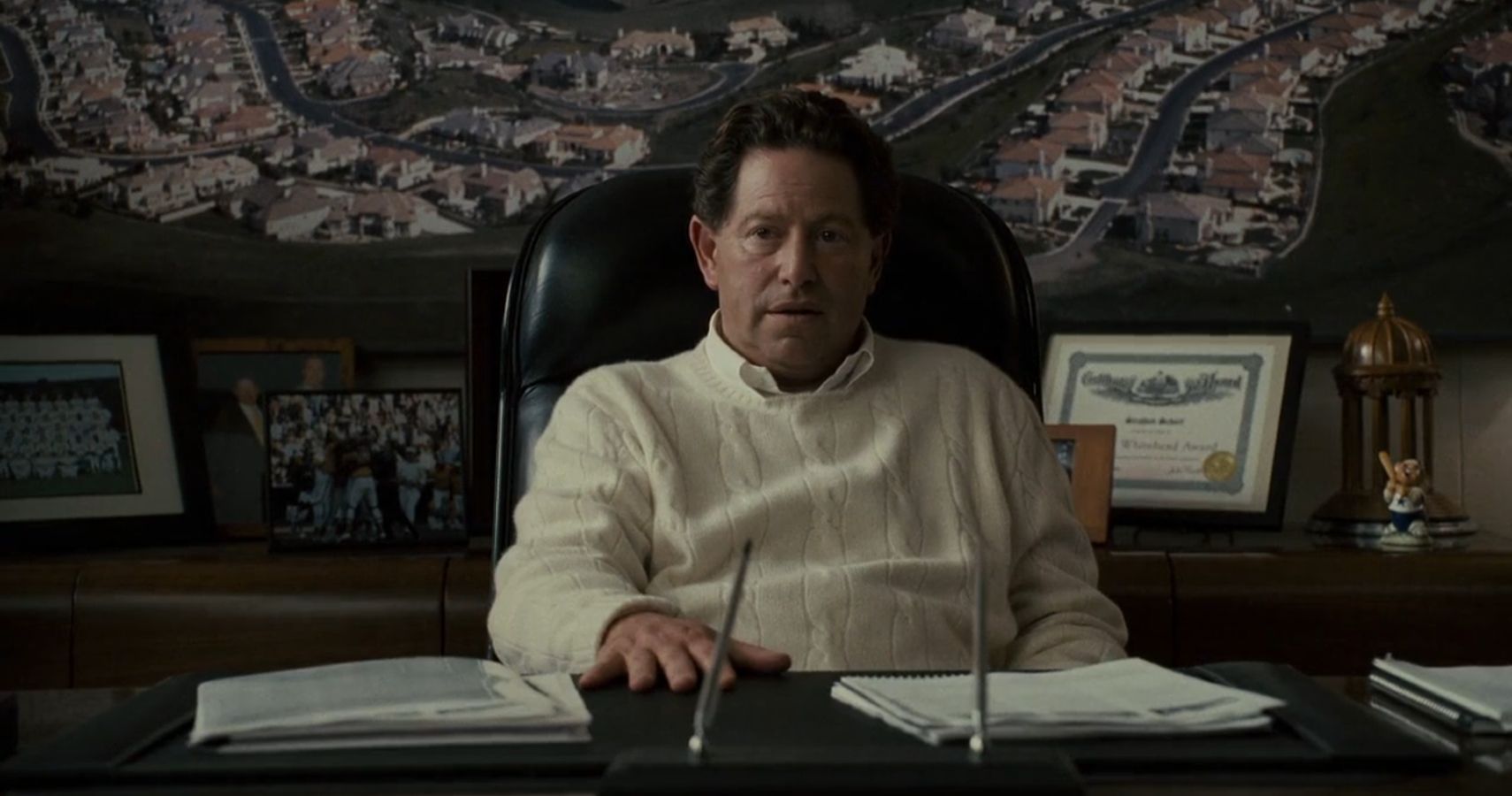 In sum, the future of esports trades will only continue to evolve in the coming years, and as prize pools continue to grow as well, competition will be fierce. How individual organizations formulate the best teams will be the subject of ongoing consideration, because with so much money on the table, any tactic that can provide a competitive advantage will become invaluable, and the future of esports trades will be fascinating to watch unfold.