Deepfence, a startup developing a cybersecurity platform focused on protecting cloud-native workloads, today nabbed $9.5 million in funding. The company says this investment follows a year in which its revenues and customer base more than doubled.

Some 20% of organizations get hit with cyberattacks six or more times a year, and 80% say they’ve experienced at least one incident in the last year so severe it required a board-level meeting, according to a report from IronNet. Moreover, nearly two-thirds of security professionals who attended the 2019 Black Hat USA conference believe their organization will have to respond to at least one major cybersecurity breach within the next 12 months. Last year, that figure was 59%.

Deepfence, which was founded in 2017 by Sandeep Lahane, Shyam Krishnaswamy, and Swarup Sahoo, offers solutions to protect serverless architecture, virtual machines, and containers from malicious attackers. Deployed as a set of microservices (i.e., loosely coupled services and protocols), the AI-powered Deepfence platform measures and maps runtime attack surfaces to provide a defense against known and unknown threats. 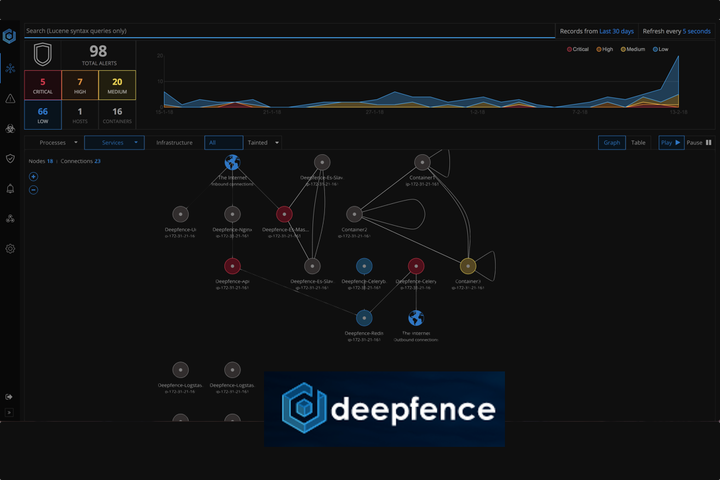 Deepfence doesn’t depend on manually generated behavioral models or hand-coded static rulesets to detect intrusions. Rather, it monitors and performs deep inspection of network traffic, system, and app behavior and correlates suspicious behavior across an organization’s infrastructure. Developers get forensic trails, including packet captures, system calls, and anomalous issues that can be routed via Slack, Pagerduty, HipChat, and other apps.

But Lahane says Deepfence’s early adopters were attracted to the “novelty” of its runtime protection technology. “We have seen significant traction since we started commercializing last year,” he told VentureBeat via email. “Simply put, our customers love the fact we not only detect and protect better, but also displace point solutions which are focused only on one modality, like containers.”

Deepfence’s funding round was led by AllegisCyber, with participation from Sonae IM and existing investor Chiratae Ventures. The startup is headquartered in Milpitas, California with offices in Bangalore, India.