eBay is introducing a new computer vision-powered feature to help sellers’ listings stand out. Image Clean-up, as the tool is called, automatically removes the background from a photo so that only the item being sold appears in the image.

It’s fair to assume that most people aren’t experts in Photoshop, nor do they have professional photography studios in their homes, but they are likely to have a smartphone with a decent camera. In the new version of the eBay app, sellers will be able to snap a photo of whatever it is they’re selling and then use eBay’s tech to turn the background behind the object completely white, eliminating any laundry baskets or dirty tables.

“You only get one shot at a first impression, and listings with a clean white background have the potential to convert better and sell faster,” eBay wrote in a blog post today.

After the seller snaps their photos and uploads them through the app, eBay will attempt to remove the background noise automatically. The user will be able to manually “touch up” any areas that have been missed, however. The contrast between the foreground and background in a photo, as well as the shape and format of the product, may impact the efficacy of the automated tool, so a manual option could prove useful. 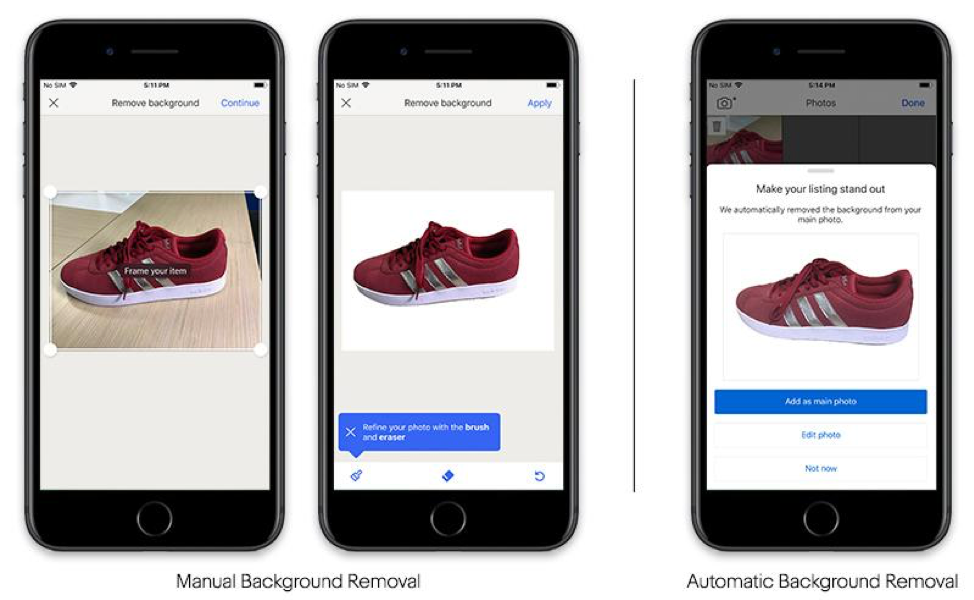 While the feature is mostly about making the item stand out by removing clutter, eBay also said it will help with SEO (search engine optimization). It’s not entirely clear how, but listings with cleaner images may stand out in search engine results, thus encouraging more people to click — and the more clicks a listing receives, the more prominent it will appear in the search engine.

As eBay sells off various parts of its business, including its former ticketing subsidiary StubHub and a classifieds ads business reportedly worth around $10 billion, the focus will ultimately fall back on the ecommerce platform for which it’s best known. eBay has made moves to improve the selling and buying experience across the board, and artificial intelligence (AI) has played an increasingly big part in this effort over the past few years.

For example, in 2017 eBay rolled out computer vision search that allows shoppers to find goods using existing photos. And a few months back eBay relaunched a dedicated Motors app centered around AI and automation  — including an image-categorization tool that automatically groups seller photos by type.

The new feature is rolling out to the main eBay Android and iOS app in the U.S., U.K., Germany, and Australia now, and it will be landing in other regions around the world over the next month.